Easily one of London’s most exclusive club’s, the renowned ‘Home House’ private members club residing at 21 Portman Square recently opened its basements to make way for their latest addition ‘The Vaults.’ In the spirit of Studio 54, the place where “everyone was a star” (Andy Warhol) and the place where “anything happened,” Home House has provided a modern luxurious twist on the original glory days of disco with their new late night party rooms, ‘The Vaults.’

Drawing inspiration from members’ clubs such as Studio 54, Regines, Annabels and Harry’s Bar, The Vaults is a timeless playground for the discerning clientele nestled in the basement of No 21 Portman Square. Daring, decadent and potentially debauched, The Vaults is set to become the ultimate portal to hedonism.

With its own private entrance leading down a resin staircase to a leather-clad door complete with gold chain-mailed peepholes, the playrooms are the ideal after-hours party destination. The rooms themselves are complete with ambient lighting, the most luxurious textures and cutting edge art and sculpture. Rich tones of copper, bronze and gold are married with crystal and faux tortoiseshell and there is even an architectural aquarium to achieve a new level of opulence and splendour at Home House. With each item having been specially commissioned, the basement has been transformed to reflect a time of decadence and pure indulgence on a scale not previously witnessed. 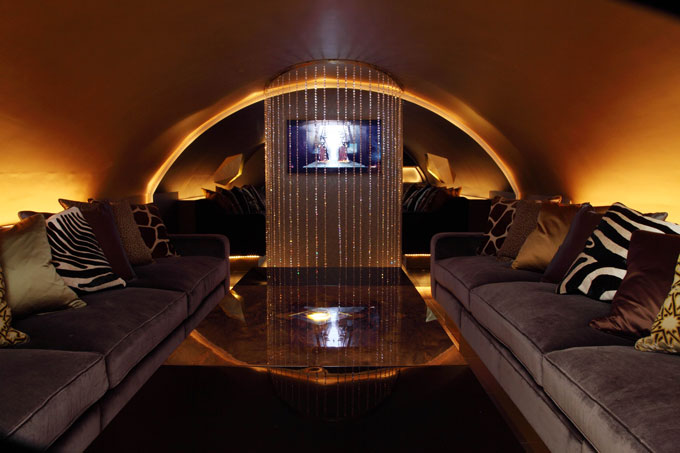 The stunning contemporary space, consisting of a bar lounge area and 2 private rooms accommodates up to 80 people; each of the more intimate rooms can host 20. Partygoers will be able to select from a fabulous cocktail and drinks menu featuring Moet et Chandon Vintages and Dom Perignon as part of the premium bottle table service. There are X-Box’s and karaoke machines for client’s entertainment or a burlesque stage for the more adventurous guests to enjoy.

In the coming weeks, there is further excitement as Home House will be taking the concept of bespoke parties to another level as high profile personalities from the entertainment world will be curating their own parties for all to experience. With so much going on, The Vaults will undoubtedly become London’s go-to club and the best thing… after 1am almost anything goes! As the House’s Managing Director Andrew Richardson says… the house rule:
“Never say no to any customer request unless it’s illegal!”