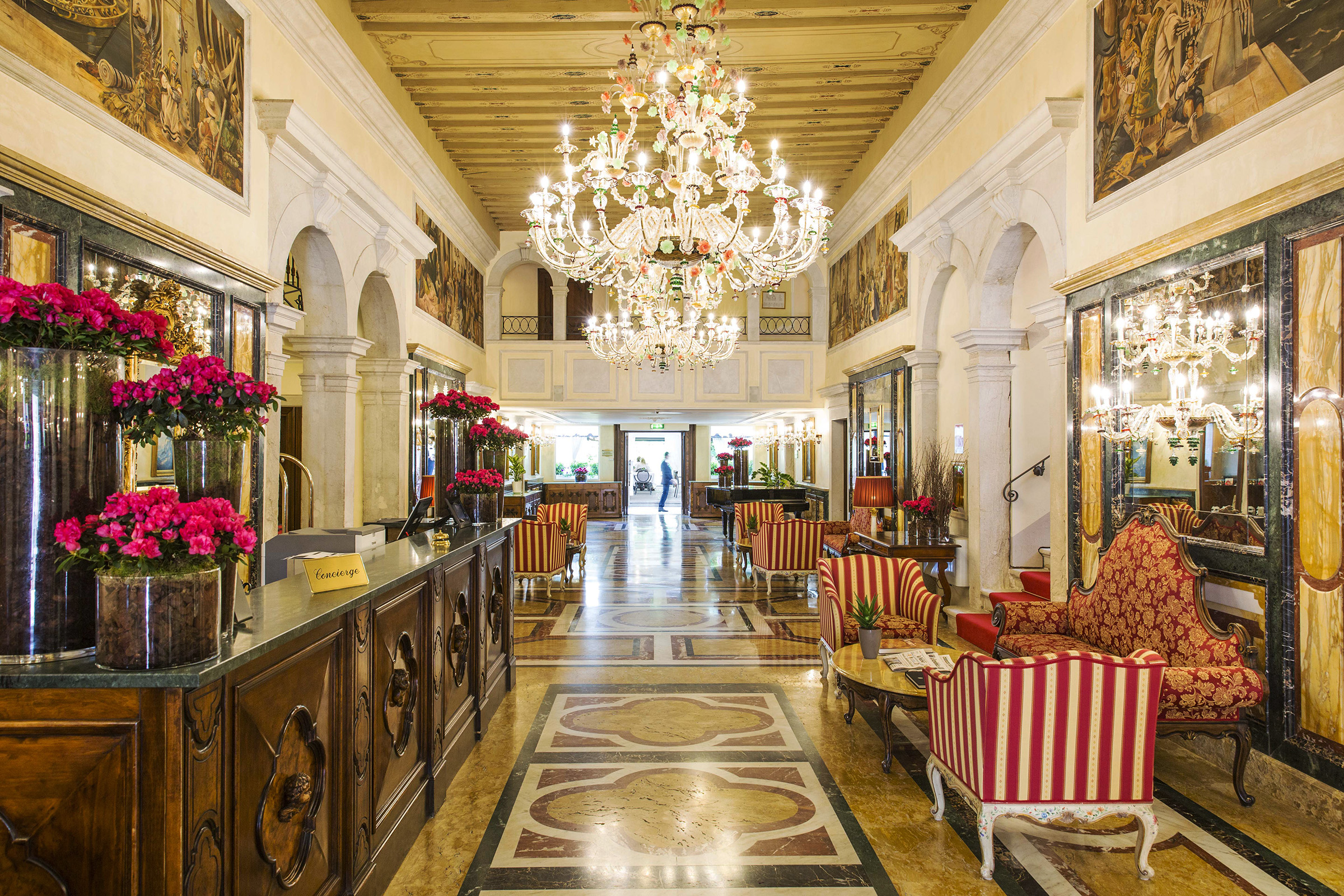 Monarchy has been the pinnacle of fantasy for many. Over the years, the Windsors, have captured our hearts and imagination, and even more so now with the upcoming wedding of Prince Harry and Meghan Markle. Billions of people all over the world have stayed in waiting to witness even short glimpses of the royalty, and their interiors, both their lives and their homes. Imagine being able to live in the palaces where royalty has lived, being able to wake up in their bedrooms, lunch in their dining halls and bathe in their tubs, walk in their gardens, and lounge beneath the same chandeliers that lit up the parties where Kings and Queens mingled. Since the British Monarchy still performs a ceremonial duty, that is not yet possible in the palaces of the United Kingdom. But if you journey a few miles down south, towards the Mediterranean coast, specifically Italy, where royalty has left to give way to a republic, that experience to live as a royal is possible for the few elite that will only accept the best in luxury. You can leave your imagination, and head into reality, in Venice, one of the most beautiful cities in the world and the capital of luxury during its heyday. There at Grand Hotel dei Dogi, dreams come true, you can live as the royals once did, in a real palace which is now a 5 star luxury hotel. 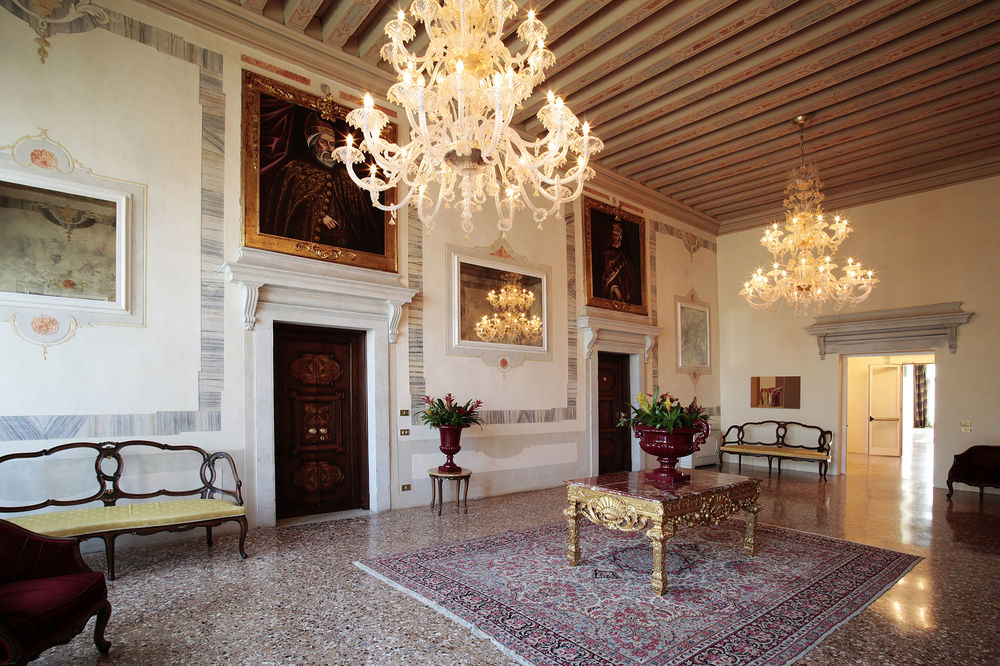 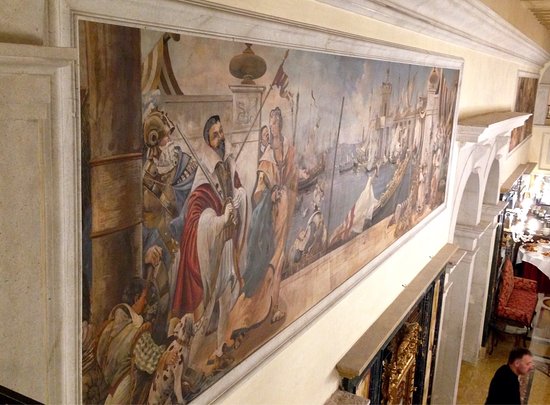 The Grand Hotel dei Dogi, previously known as Boscolo Venezia Autograph Collection, is a luxury Hotel housed in the ancient and prestigious Palazzo Rizzo –  and was also the Patarol Palace. It belonged to the nobility known as Patarol family. At the time of the Serenissima, this was the only area planted with small crops. That’s why Grand Hotel dei Dogi  is the only luxury hotel in Venice to have a private garden, a green 2,000 m² area overlooking the lagoon. And has also served as the French and Savoy embassy. The XVII-century facade has a portal and loggia on overlapping levels and hides a unique secret garden, which is perfectly preserved and faces onto the lagoon from which modern day movie stars and billionaires can get on their private water boats and jet away on romantic excursions much like the Kings of today. The luxury of its precious marbles, splendid period frescoes and majestic chandeliers makes Grand Hotel dei Dogi, the ideal place to immerse yourself in the magical atmosphere of this unique city. It is close to the centre but far from the most crowded streets, and lends a sense of peace to the city’s multifaceted charm. It is the perfect location for connoisseurs and romantic escapes. 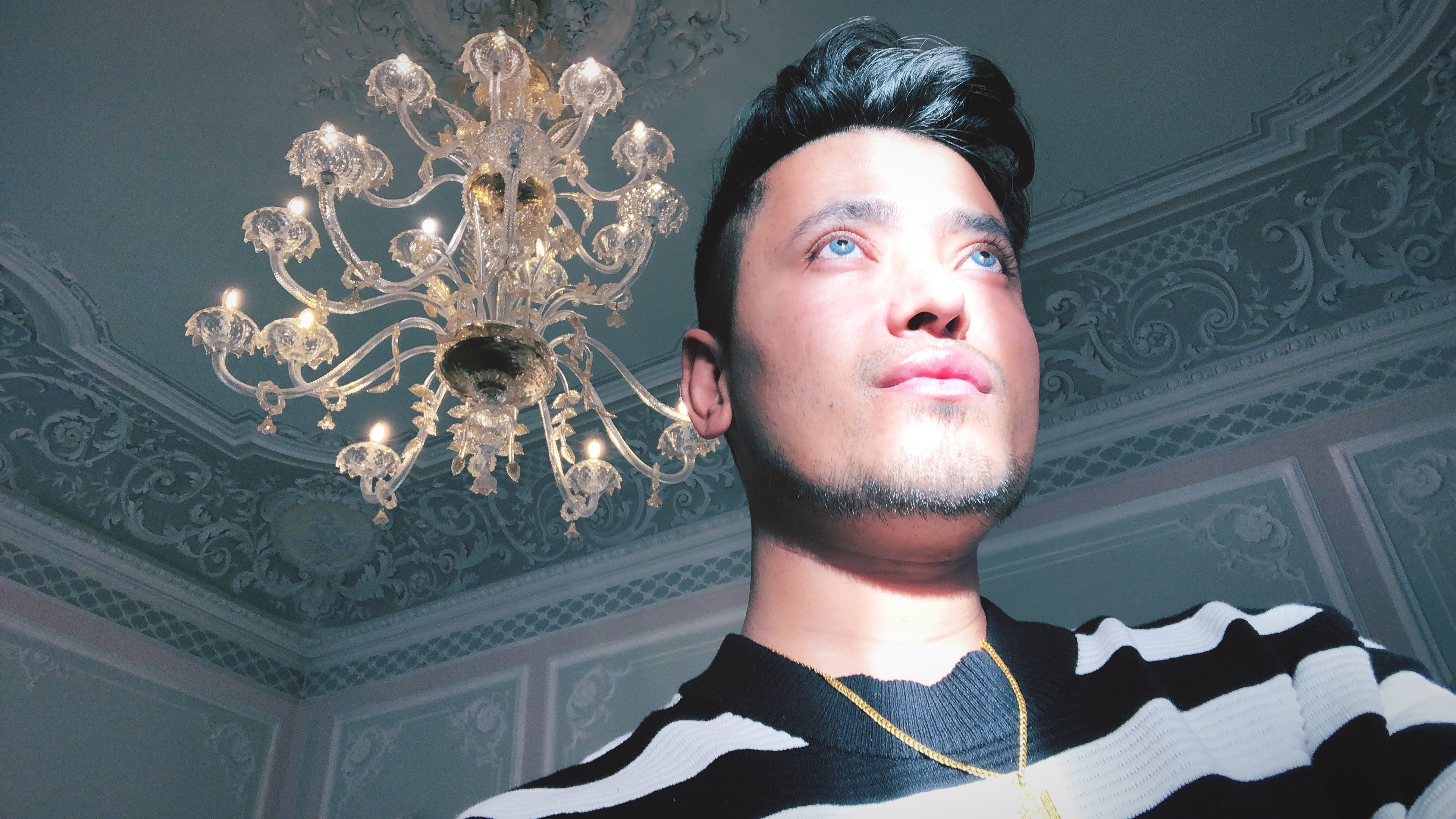 Global Luxury Ambassador and Philanthropist, Pritan Ambroase, was recently invited to vacation at the Grand Hotel dei Dogi in their VIP suite and he asserts, “I am beyond amazed by the magic of Grand Hotel dei Dogi. Venice is one of the most beautiful cities in the world, and this hotel is like a jewel on the crown of this one-of-a-kind city. I am simply amazed by its architecture, interior, exteriors and above all by the quality of its service and the people who currently provide an excellent service at the former palace. From the moment I entered the doors, I felt at home due to the home-like warmth, familiarity and kindness brought forth from the talented staff. The luxury and pristine quality of the rich decor is balanced by the comforting service and warm attitude exuded by each of the staff members. My biggest gratitude and praise for the team and grazie mille for taking care of my family member and I  during our entire stay, namely to Lara Griffante, under whose guidance and support, the entire team including General Manager Martina Di Luca, Deputy Manager Chiara Zambianchi, Alessio, Vadim, Edo, Rimona, Bane, Martinz, etc were simply excellent and happen to be an efficient asset and a complement to the rich history, luxury and quality of Grand Hotel dei Dogi. My suite was a time portal which teleport-ed me and my family member to the times when royalty still lived at Patarol Palace. Exquisitely furnished with antiques and fine art that lace the walls still speak of its royal heritage. The garden and the underground grotto are out of a fairytale. The management team provided us with a private boat which was made all the more immaculately unique and lucrative by the secret backdoor gateway which opened onto the lagoon and right onto the private boat which jetted us off for a private tour of the Murano Gallery museum and the Murano Island. Sleeping under the precisely crafted chandeliers built by 1000 year old Murano artists, the same chandeliers that grace the ceilings of royal palaces all over the world, beauty was all around me and available without any effort. It is definitely a five star hotel that goes beyond the common luxury experience, with its pedigreed heritage, and with a home feel provided by its exceptional team. Once again, I have to thank the personnel who were there for us, as I believe that a luxury establishment no matter how richly decorated is nothing without its human faces and excellent service. I am already homesick for the architecture, decor and the team of this magnificent hotel. I hope to be back again soon and continue visiting for the rest of my life with my family.” 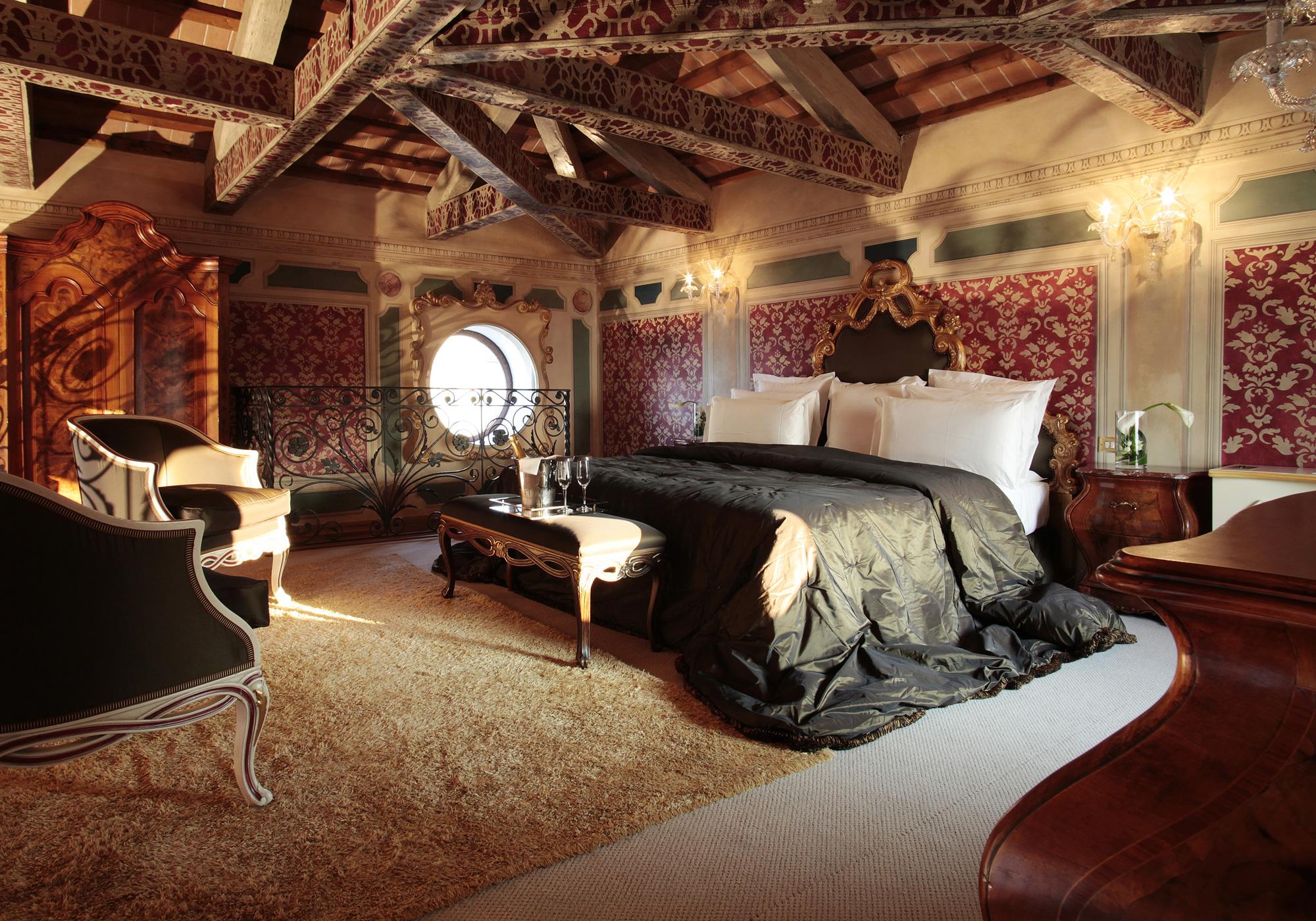 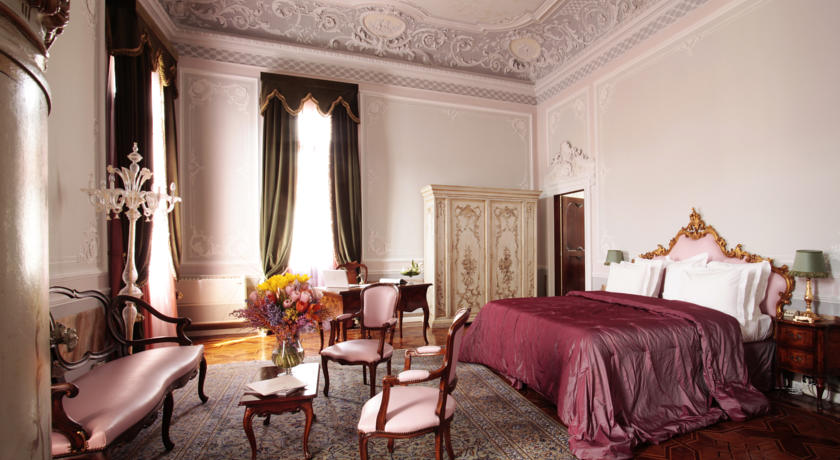 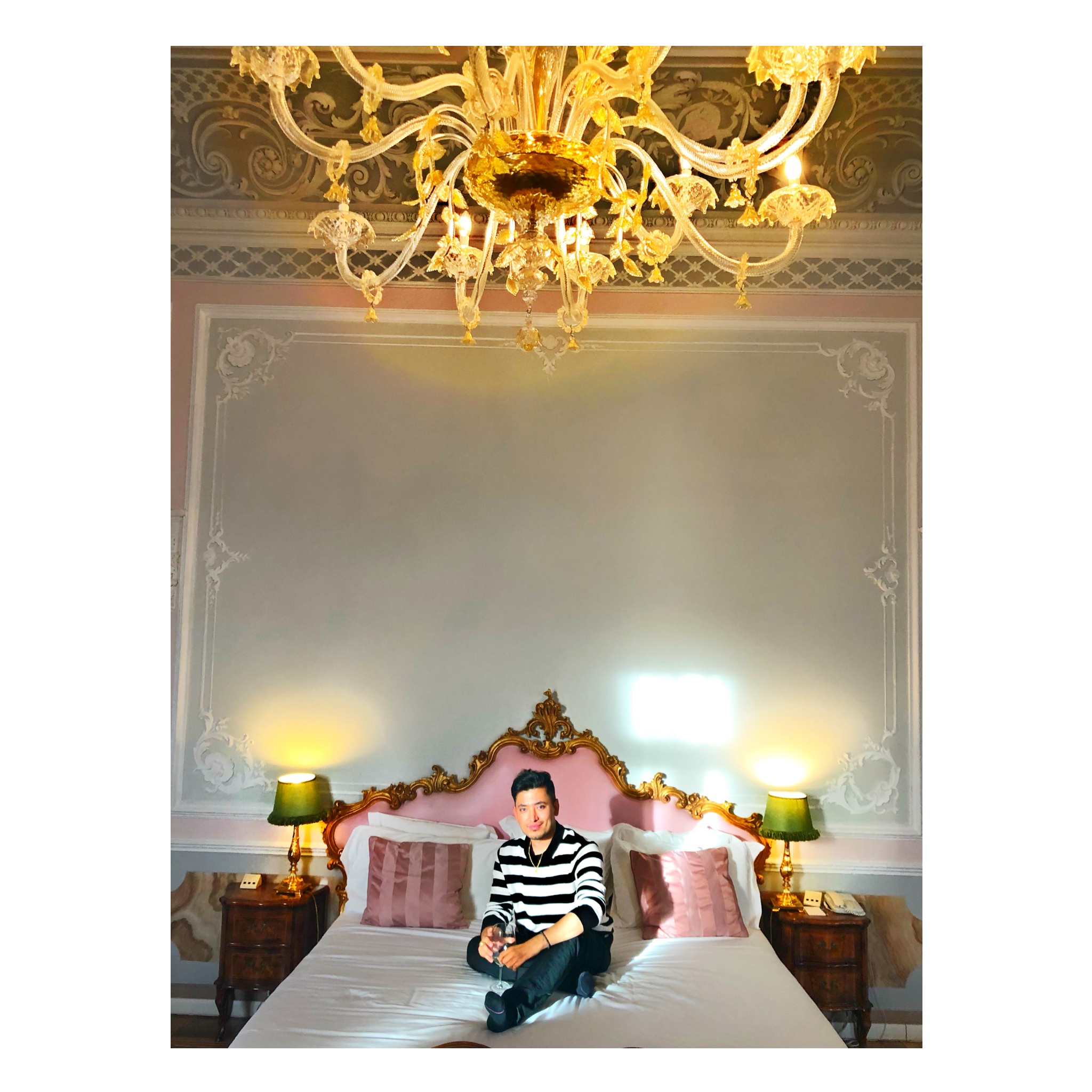 The nearly 70 rooms are a compendium of Venetian style with high ceilings and period décor. The extravagance of the nobility lives on in their 9 Junior Suites. While the configuration of each is unique, they are all furnished with Oriental carpets, painted 18th-century wardrobes and Murano glass chandeliers. Some look out onto the hotel’s splendid garden, while those on the ground floor open onto a grand hall, a majestic and dignified space where you can organize banquets and receptions guaranteed to be unforgettable. The Presidential Suite is a Venetian dream: detached from the hotel and immersed in the magic of the garden, it has a sumptuous dayroom and a balconied sleeping area from which you can watch the sun rise over the lagoon through floor-to-ceiling windows. The Garden has an old world charm along with actual ancient and medieval plants.  Its dimension (2,000 square meters) and for the extraordinary rarity of its botanical species make for a magical experience. The plants have been curated from all over the world over 1000 years by the nobility that owned the palace. You can also visit the ancient underground ice-house, where the earliest owners would store ice imported from northern Europe. Needless to say, it is quite exciting to sip an aperitif in such a place and a private escape from the far end of the garden opens out onto the mysterious and romantic spectacle of the Venetian lagoon: a magical encounter between land and sea. And if you do not wish to leave this enchanted corner of timeless beauty, you can spend your whole visit here; as the Presidential Suite sets apart from the main building, immersed in the garden and facing onto the lagoon. Its former owner, Lorenzo Patarol, a passionate lover of botany, created three herbariums describing more than a thousand plant species grown both in the garden and out of it. These three volumes are now stored inside the Museum of Natural History of Venice. The garden has been considered, during the centuries,  one of the peculiarity of the city to be visited by foreigners. That is the reason why in 1815 the  Austrian Emperor Francesco I visited it during one of his trip to Venice. In 1833 the palace has been inherited by Giovanni Correr, that deeply transformed the garden following the  romantic taste  typical of the period,  that replaced the geometric shapes of the Italian gardens. Within the garden there is a ravine with a statue of Virgin Mary surrounded by artificial rocks, fountains and bushes. That is the evidence of the palace housing a nunnery in the  twentieth century. 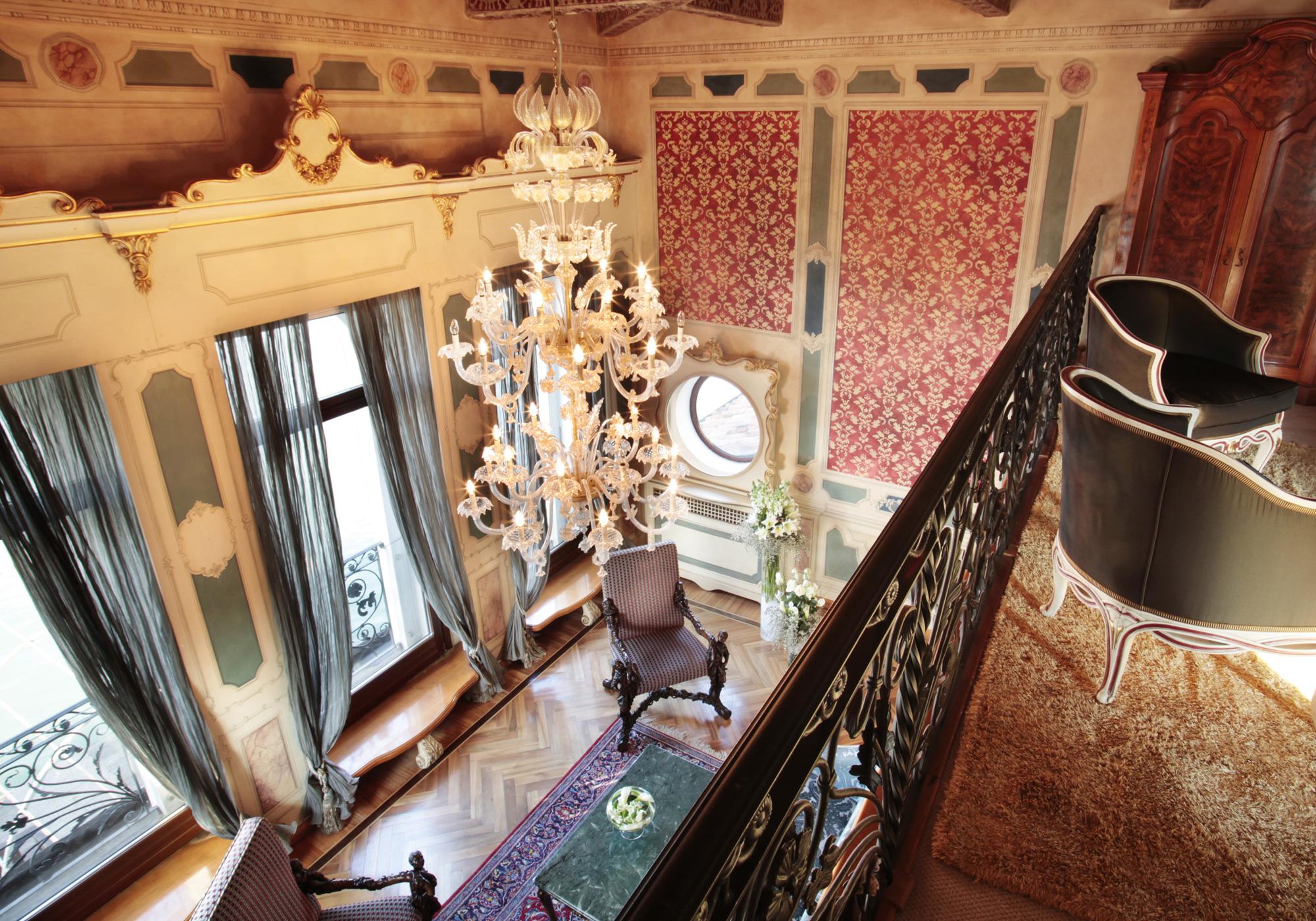 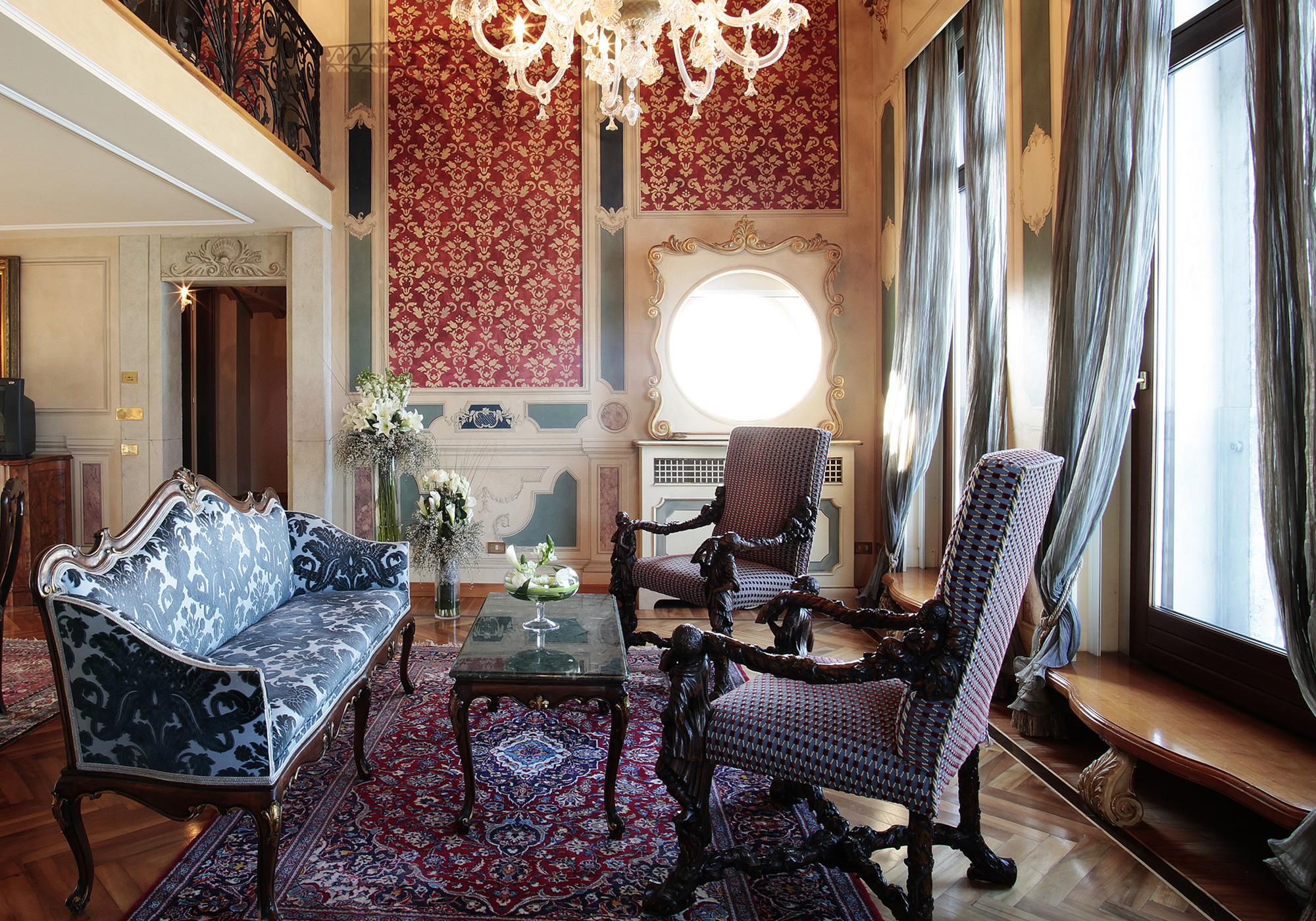 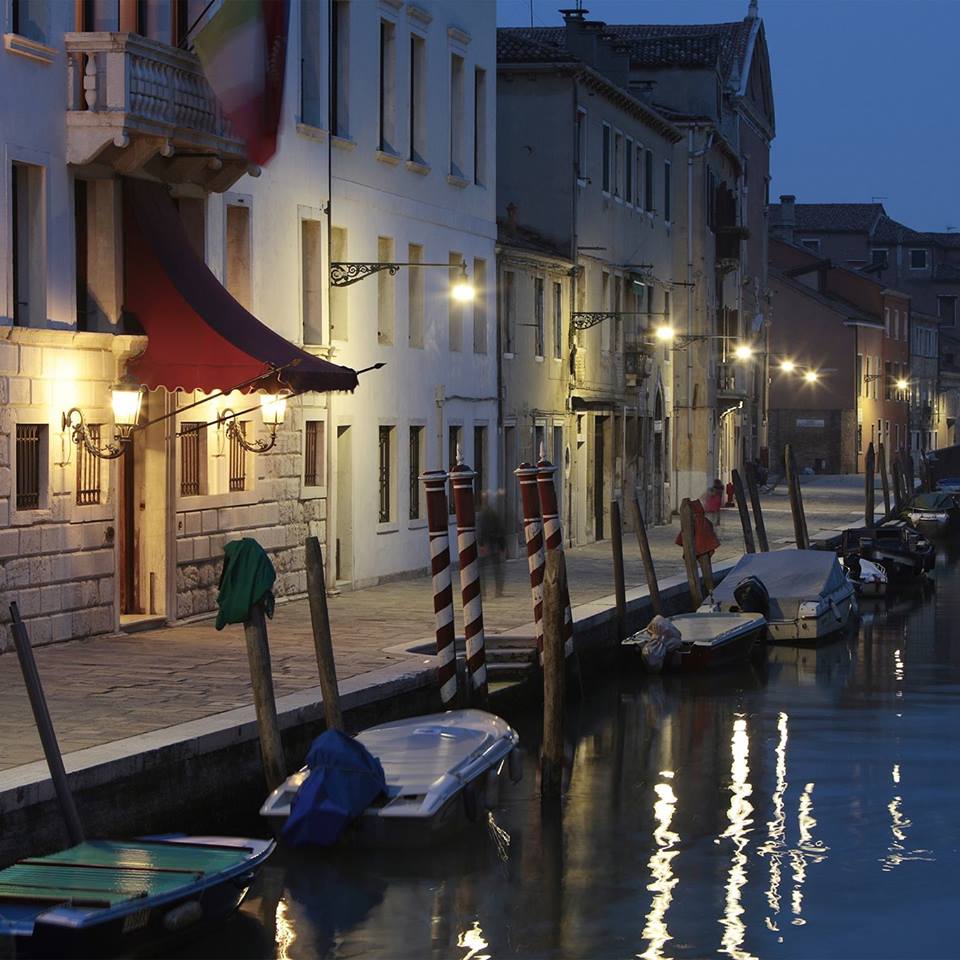 The Restaurant Il Giardino Segreto is well-known in the city for its Venetian and international specialties. Its world-class cuisine is capable of satisfying even the most demanding palates, making it one of the most exclusive havens of luxury dining in Venice. The Hotel also has a wellness centre, an exclusive place with the undying fascination of the historic Rizzo-Patarol palace. Elegance, style and design concur in creating a regenerating and purifying oasis right in the heart of Venice. The wellness centre invites its guests to experience the peacefulness and richness of the treatments designed for the well-being and care of the whole body. The Spa became famous in the 19th century as the new tourist attraction in Venice with its marine baths that attracted a large number of guests. Still today it is possible to relax to the pleasurable sensation of a revitalizing bath in a hospitable and relaxing atmosphere. 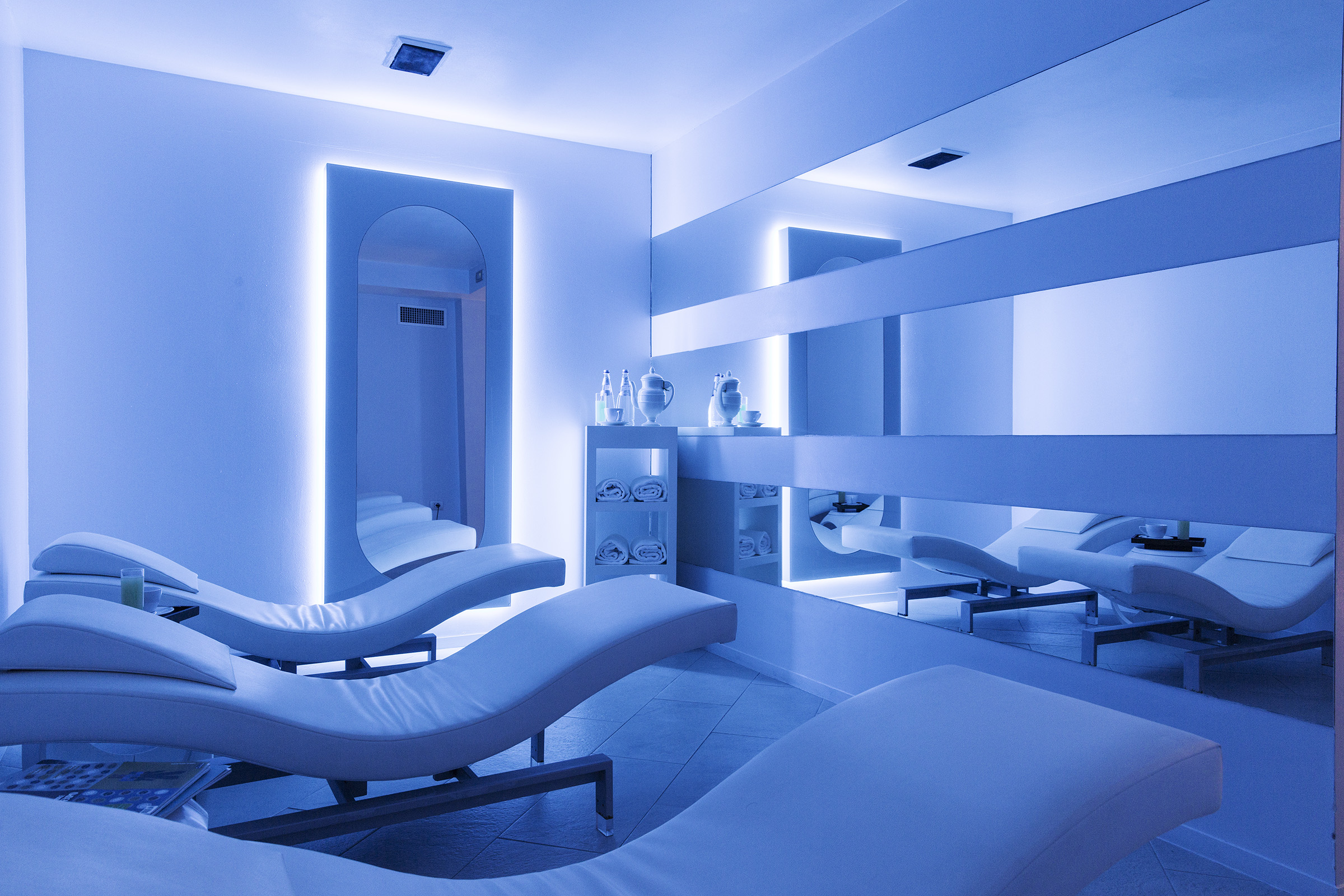 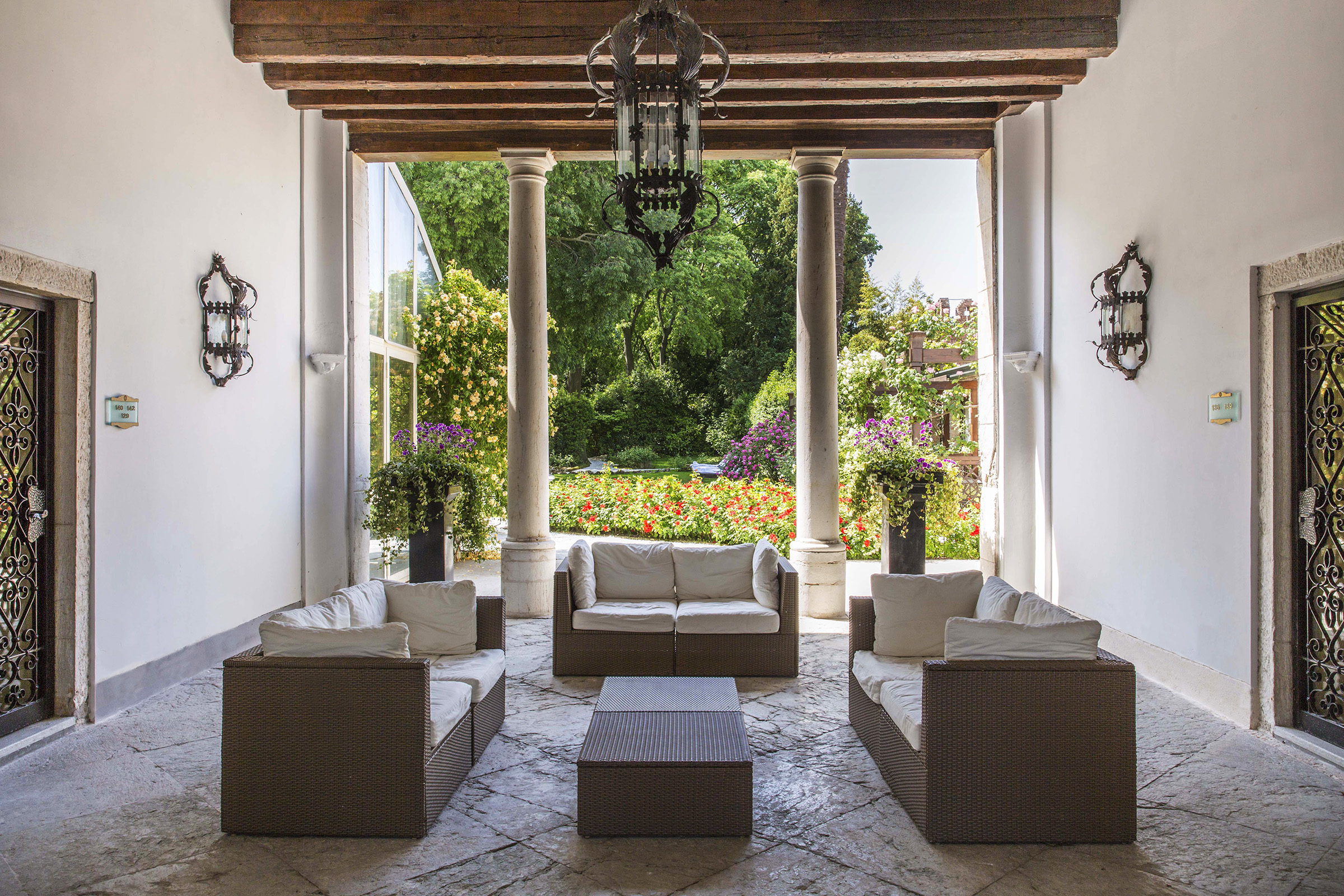 If you have caught the royal wedding fever, and or wish to view the royal wedding, then it might be wise to book a vacation at Grand Hotel Dei Dogi and watch the ceremony happy from the luxury of a royal palace. Please visit www.dahotels.com/grand-hotel-dei-dogi-venezia/ to make your bookings for a truly royal experience.