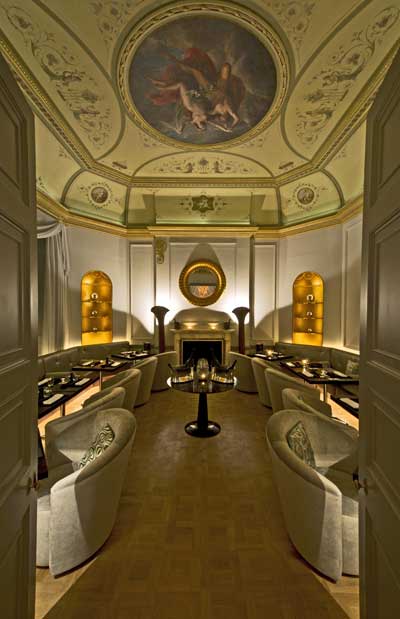 Home House was built in the late 18th century for Elizabeth, Countess of Home, aka the ‘Countess of Hell’ who commissioned a pavilion for her infamous parties. Robert Adam obliged with an interior layout that still lends itself to modern-day carousing. All the rooms lead into each other, while up the middle twines a spectacular double curved staircase, surmounted by a glass dome at the top. It’s also housed the spy Anthony Blunt, while he was director of the Courtauld Institute, and MI5 is said to have concealed a listening device in the connecting wall with 21 Portman Square… Home House’s current incarnation is very much closer to what the Countess had originally intended. She’d probably recognise most of it, despite all the mod cons, as it’s been meticulously restored as befits its Grade I listed status. Alas, no sooner has one section of intricate plasterwork been touched up than an enthusiastic party causes another chunk to fall off.

Part of Home House’s charm is how the original architectural features are integrated into it. 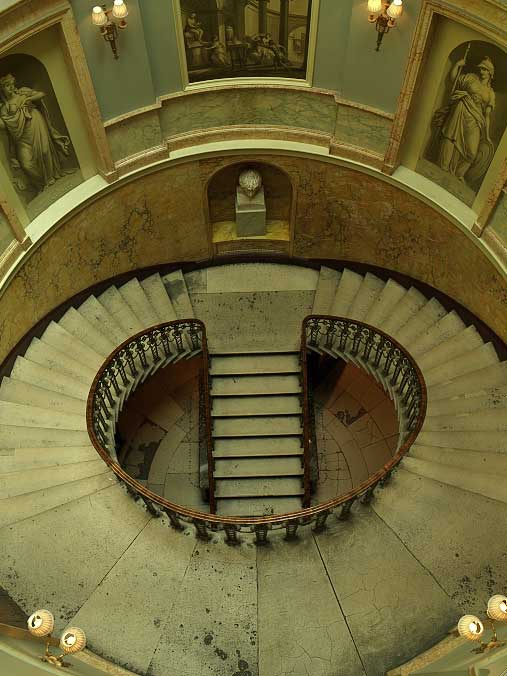 Head to the stunningly well-equipped gym, for instance (run by Jonathan Goodair who trained Madonna for years) and you’ll find yourself working out in the old kitchens in front of the antique cooking range. Similarly, the secret staircase up which the Countess’s young lovers would discreetly make their way to her bedroom, is still there, but now put to less romantic use as a broom cupboard. And the Bison Bar looks every inch the traditional gentlemen’s club, with its red walls, Chesterfield sofas and stuffed animal head, but above the bar hangs a series of plasma screens where you might expect to see oil paintings.  Down in the gym, you’ll find a mosaic plunge pool, eucalyptus steam room and a resident world-renowned facialist, Anastasia Achilleous. And of course there is a clutch of restaurants (Robert Reid dishes up classic British and French cuisine in the Restaurant, while the Octagon Room is where you go for Asian fusion). In the summer, the action moves outside to Home House’s courtyard garden, which is accessorised with a champagne bar and tented so you can dine in all weathers.
Along with the five star facilities, the club runs a thriving entertainment programme.

You can learn to fence or dance or play petanque, there are quizzes, a book club, a film society, regular private gigs, guest DJs and an annual lavish costumed ball on a theme such as ‘Fairy Tale’. The Countess would certainly approve.

The Décor: Unmatched. The whole place is a feast for the eyes, from the classical elegance of numbers 19 and 20, with their parquet floors, chandeliers and intricate plasterwork or painted frescoes to the pared-down chic of 21, designed by the Candy brothers and featuring Zaha Hadid’s astonishing swooping silver bar. Each of the 20 eye-wateringly grand bedrooms has its unique features: the Lady Islington suite contains a colonnaded marble bathroom, the Patricia Portman room a silver leaf ceiling and 200-year-old Chinese silk wallpaper, and Anthony Blunt’s room is probably still riddled with listening devices… 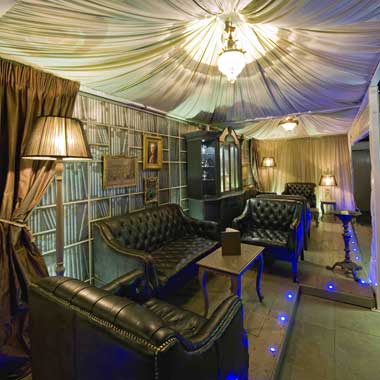 Who’s in? Madonna moved in while her Marylebone home was being done up. Other members include Gwyneth Paltrow, Thandie Newton, Stella McCartney and socialite Henry Conway. A-listers aside, it’s hard to categorise the members, except that they all seem to have an appetite for a good time.

What it costs: £1,800 joining fee plus the same in annual dues for a London member; less for out-of-towners  The Rules: the rules are, there ain’t no rules. Well, just one. “Nudity is discouraged”. “Naughtiness, on the other hand, is de rigueur.”
(so says Managing Director Andrew Richardson)