As un-culturally disgusted as I am with myself for this awful stereotype, it has to be said that when I think of Indian cuisine (and I hope I’m not the only one here?), I automatically assume curry house. Anyhow, evidently disproving this misguided conception of mine with a much-needed dose of culture and an inspired taste of India, the West End’s self-styled Bombay Café Dishoom appears to be just what the Doctor ordered.

A far-cry from Old Bombay, had it not been for the Bollywood-style adverts and sepia-toned family portraits that adorn any free wall space between the oak-panelling, the restaurant (or café, as they refer to it) actually had more in common with a classy New York brasserie, with black and white tiled floors, marble tabletops and low hanging lights over the individual tables. Granted, it had a kind of worn elegance about it, but that really just added an air of authenticity or heritage, providing a more relaxed dining experience which could comfortably cater for anyone from frolicking young romantics to City workers or elderly couples.

Based on the principle of sharing, Dishoom serves up an almost Indian tapas-like menu of appetising small dishes, all freshly (where possible) prepared in the bustling open kitchen. The staff were particularly bubbly and gave helpful advice, which if I had avoided would have resulted in a rather dry selection on my part. Despite the menu obviously consisting of customary starters, mains and sides format, in reality it amounted to simply ordering a great assortment of food and having the waiter serve them as and when they were ready, which meant we practically ended up with a vast banquet of a spread. 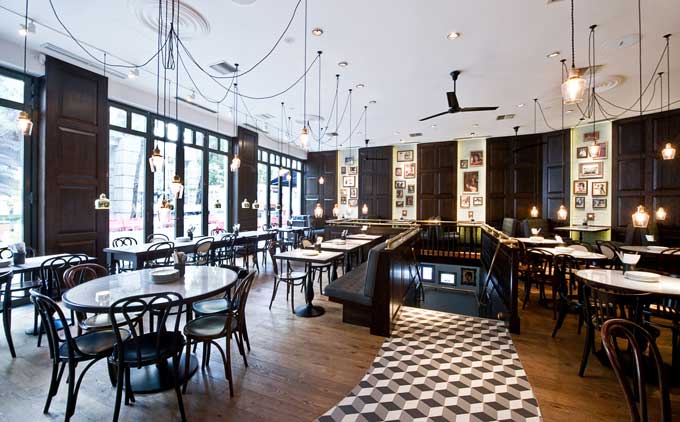 Our starters included Pau Bhaji, a spicy mashed vege concoction served with hot buttered bread, which inadvertently became my staple of the entire dinner, and although not necessarily distinct in character, was surprisingly addictive nonetheless. Very unusual, but certainly my standout dish of the menu had to be Bhel (a waiter recommendation), which was completely barmy in concept, but with an explosion of flavours that was so diverse it was as if they were never meant to be put together, it won my vote for the sheer experience alone – including puffed rice, pomegranate, tamarind chutney, plenty of fresh coriander, ginger and presumably chilli and garlic. The next dishes arrived shortly after, in fact whilst we were still barely making headway on the first portions, these included Grilled Masala Prawns, with lime, tomatoes and coriander which were devoured rapidly thereafter, while a delicious yet unfortunately dry Dill Salmon Tikka salad with fresh mint yoghurt dressing pleasantly paved the way for some thankfully succulent Dhaba Chicken curry (with steamed basmati rice). Quick to avoid the waiter’s cheesy naan idea, we played it safe opting for the buttered garlic and coriander naan. We further made the most of the unique menu by indulging in Bombay twists on classic cocktails including a rather cheekily named Chaijito – a chai-infused rum variant of the popular Maijito cocktail, whilst the Bombay Colada was an Indian herbs and spices variant of Pina Colada.
Desert was not really called-for on this occasion so we let the food settle over some traditional House Chai and kept my partner awake with a remarkable Spiced Cappuccino.

All in all not the height of gastro-cuisine, but a damn fine little restaurant (cannot bare to use the term Café), and certainly worth checking out if you are looking for something a little different in Covent Garden.