The legendary Surf Club, a stunning former private-members club based in the exclusive zip code of Surfside, Florida, will be partnering with the Four Seasons to bring to life a new definition of luxury living. The world-renowned brand will be the hotel operator of the 150 private residences at The Surf Club, which also boasts a Four Seasons five star hotel and a private-members club.

Aside from a prestigious address and beautiful home, The Surf Club’s fortuitous residents will also own a slice of American cultural history. The Surf Club was originally founded in 1930 by social magnate Harvey Firestone and during its heyday played host to the era’s most prominent figures including Elizabeth Taylor, Frank Sinatra, The Duke and Duchess of Windsor and Sir Winston Churchill, to name but a few. 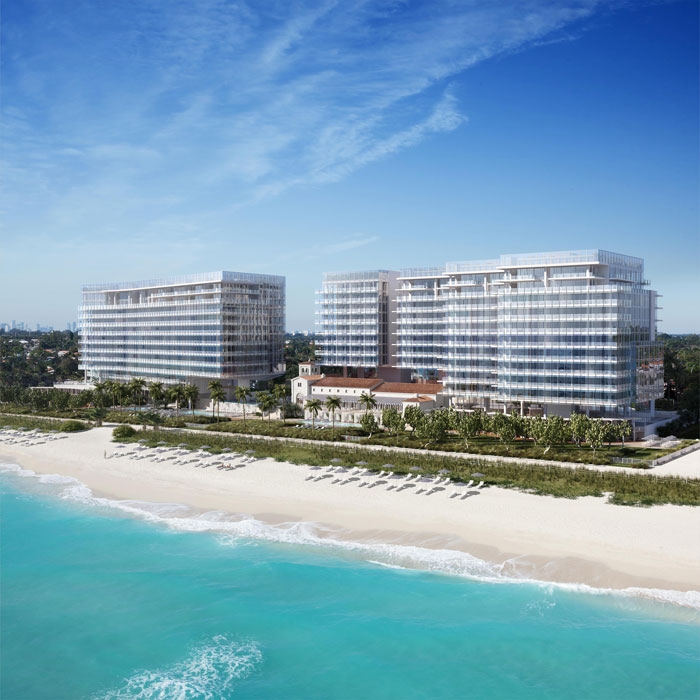 Meier’s design of the homes, which range in size from 1,400 to almost 8,000 square feet, will capitalize on the project’s sublime location, offering residents extraordinary views stretching from the Atlantic to downtown Miami. Taking a holistic approach, Meier is also designing the interiors and finishes of the properties.

Commenting on his first project within the area, Meier explains how he balanced the desire to create a new definition of luxury whilst maximizing the natural beauty of the expansive oceanfront at the site:

“Incorporating the historic structure; remaining sensitive to the gracious, low-rise context of Surfside, Florida; and further exploring the relationship between structure and sea has been a wonderful project for the firm. With the addition of Four Seasons, I feel confident that the homes and penthouses we have created will be enjoyed to their fullest”.

The Surf Club Four Seasons Private Residences range from US$3 million to US$35 million.