Situated across the river from Westminster where onlookers would more likely remember it as the resplendent backdrop to London Eye; when it comes to 5-star views the Marriott London County Hall certainly deserves all five of them, but is there more to star ratings than views and historic prestige?

For a tourist visiting London (assuming a Heathrow arrival), the approach to County Hall really is about as good at it gets, passing so many landmarks that it is a sightseeing tour in its own right. The route (depicted below) encompasses The Natural History Museum, V&A, Harrods, Harvey Nichols, Wellington Arch, Buckingham Palace, Big Ben/Westminster, The Thames and London Eye …so wind the windows down and cameras at the ready! 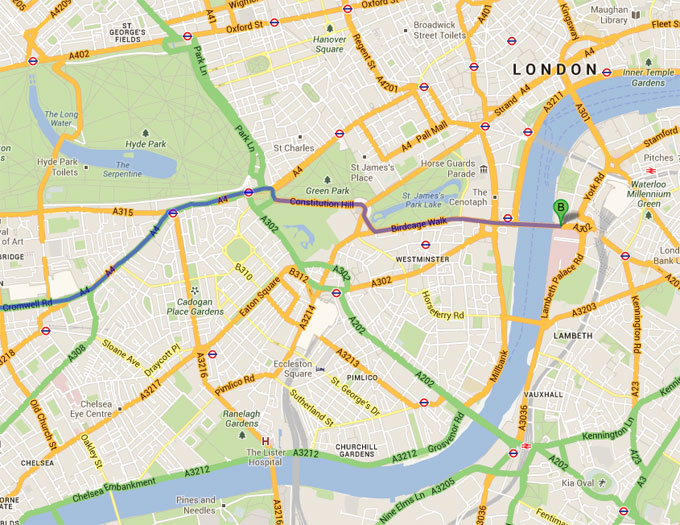 Upon setting foot into the grand entrance of the Marriott London County Hall, there is a gentlemanly tasteful oak-panelled foyer ahead, whilst the reception desk lies further down the corridor on the left. The reception staff were relatively welcoming (once they managed to prize the phones away from their ears), but thankfully once checked-in, we are greeted by the hotel’s charismatic and highly knowledgeable venue manager Joe Carter, who gave us a well-informed tour of the premises covering its intriguing history …

Conceived by the ambitious young architect Ralph Knott, who was just 29 at the time, his initial London County Hall design was subsequently revised and brought to life by architect Alick Horsnell, whose input thankfully included shifting its semicircular terrace from the land to the river-side of the building.[/one_half] [one_half_last] 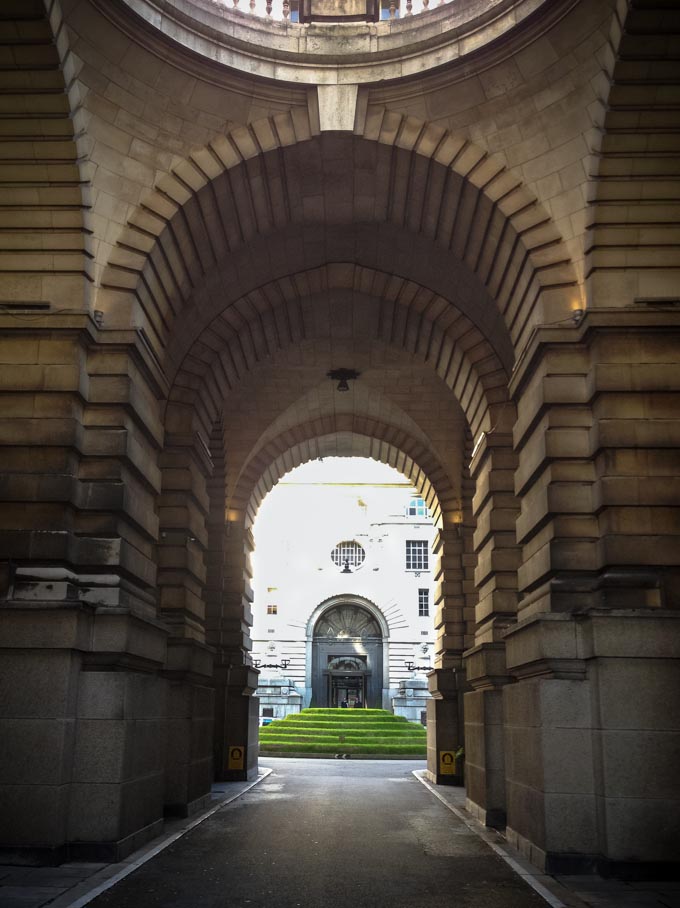 The County Hall build was started in 1911, although interestingly encountered some delays during excavating when a 3rd Century Roman Galleon was unearthed (now in the British Museum), but finally opened in 1922 by King George V.

First serving as the headquarters of London County Council, it soon reverted to the then powerful Labour-controlled Greater London Council (‘GLC’). During the 1980’s led by Ken Livingstone, the GLC became embroiled in a conflict with Margaret Thatcher’s Conservative government, which ultimately resulted in its abolition in 1986 – An outcome that was clearly a not helped by the fact that its front facade was regularly used as a billboard for anti-government slogans.

Beyond this point, the building has had a fragmented history, but since 1995 when it was controversially sold to Japanese real-estate company Shirayama Shokusan Corporation for a meagre £60 million, it has now become the home of a number of businesses and attractions that include the London Sea Life Aquarium, London Film Museum (occupying rooms vacated by evicted Saatchi Gallery), a budget Premier Inn, London’s Death Trap (a horror maze with live actors to scare visitors), County Hall Gallery, London Dungeon, an amusement arcade, several restaurants and some flats …not to forget The London Eye which sits in front of it.

Set within the hotel’s Library Lounge, which is exactly that, an authentic oak-panelled former library with books that look like they never left; afternoon tea is a very distinguished experience and boasts easily the capital’s most picturesque view of Westminster from across the river. 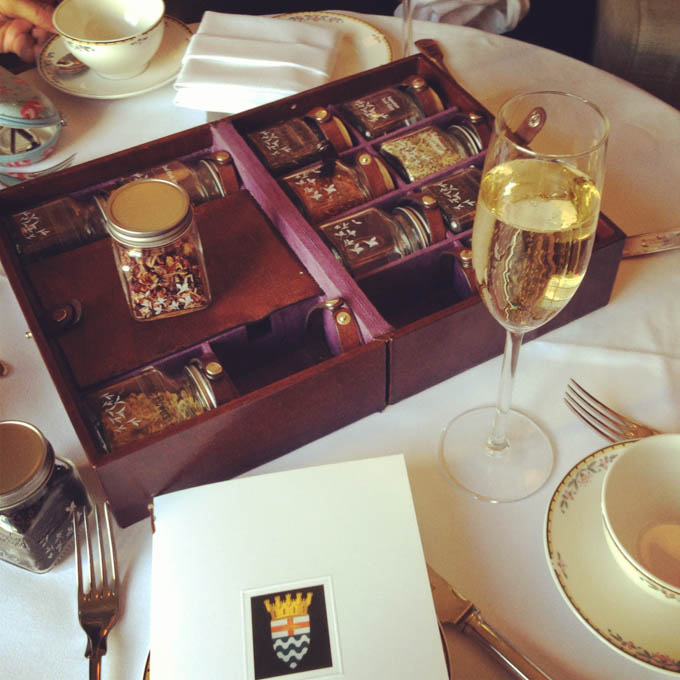 Upon seating we are soon presented with a selection of several varieties of tea-leaves of which to choose from – I opt for lapsang souchong whilst my partner and other two guests play it safe with English Breakfast and Earl Grey. Understandably no afternoon tea would be complete without the obligatory glass of champagne, although on this particular occasion we sadly should have given this a miss, as our young waitress comes back and manages to spill an entire glass over my partner. The waitress appears genuinely sorry and tries her best to dab the mess with tissues, but far from happy with her new boots and best coat now drenched in champagne, for the sake of keeping the piece I insist that they get it dry-cleaned (which realistically should have been their solution in my opinion). In their defence, thankfully they oblige and deal with it immediately. 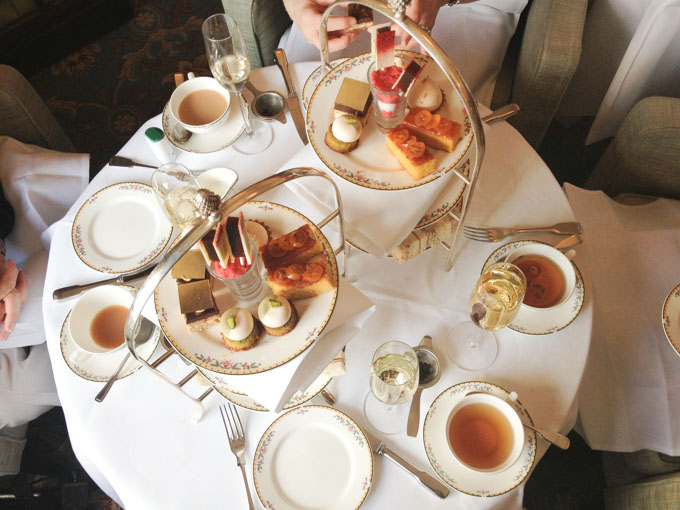 Accidents aside, the assortment of finely cut sandwiches, freshly baked scones with jam and clotted cream, plus accompanying range of delectable delicacies soon make up for the mishap, whilst champagne washes away any resentment.

I am all for preserving British heritage, as are the even more picky city planners, Marriott however have taken this one step too far, seemingly preserving the rust on the gym shower pipe-work, cracked windows in the changing room, missing seals around the Jacuzzi, broken fans within the heating unit of our suite …the list goes on.

I have never been a fan of over-critical reviews and admittedly tend to glaze over minor imperfections elsewhere, but sadly in the County Hall they were not few-and-far-between, but blatantly obvious. To put in bluntly it should have its star rating downgraded to a 3-4 star and its Manager ought to be fired and replaced with one who has an eye for detail. Internet was a paid for extra priced in the region of £15 for a mere 24 hours, bathroom toiletries were nothing special, definitely not the Molton Brown or ESPA joys that I have become accustomed to in London’s other 5-star hotels.

Their website bravely proclaims Gillray’s as ‘the best steakhouse in London’, which having ordered seafood (through personal taste rather than trying to be difficult), I sadly cannot comment on this, but my partner’s Cornish Oysters with Champagne & Shallot Vinaigrette and my Pan Fried Scallops with Black Pudding Celeriac and Apples proved excellent starters. Our mains left a great deal to be desired, with poorly presented (although not bad tasting) grilled South Coast Lemon Sole, being accompanied by a non-inspiring bowl of vegetables. 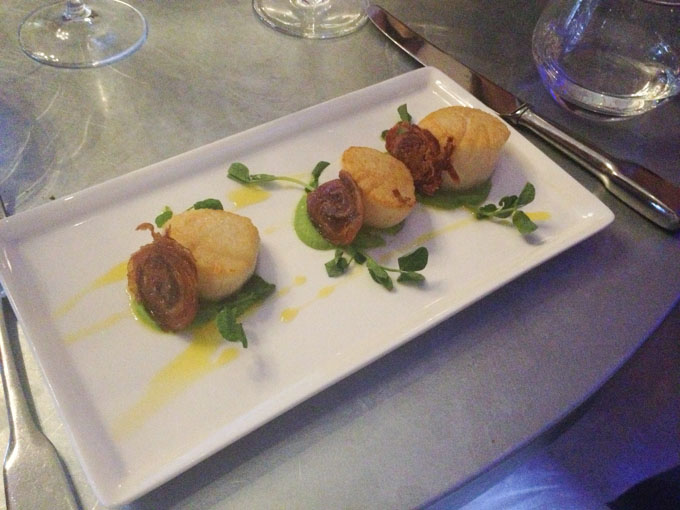 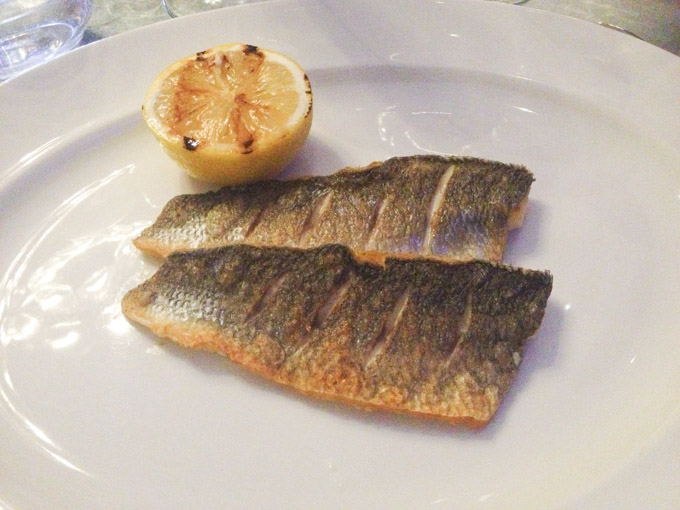 As a fan of experimental cocktails my curiosity got the better of me and I opted to sample one of the mixologist’s modern signature creations; ‘Chocolate & Hazelnut Martini’, a milk chocolate liqueur shaken with Rémy Martin VSOP cognac, quince liqueur and hazelnut syrup – served with a chocolate twist. Whilst in hindsight reading back the ingredients I know it was a stupid decision, the drink was (perhaps understandably) foul and in my mind should never have been on the menu. Playing it safe the second time round I settled for a simple Gin & Tonic.

Judging by the next to none-existent dessert menu, I can only assume that this is a course that Gillray’s does not really approve of, but nonetheless managed to polish off proceedings with a rather tasteful Chef’s Sorbet Selection and hear that they are quite renowned for their cheese boards.

Not a restaurant I would be returning to for anything but its panoramic views across the Thames, but then maybe if I had gone for a steak and not experimented with cocktails I may have had an entirely different experience. 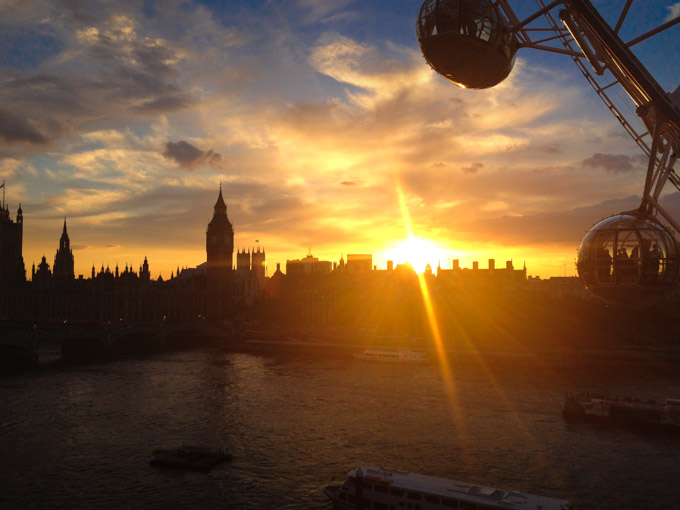 I think that negatives aside, it wouldn’t have seemed that bad if it were branded as a 3 or 4-star hotel, its just evidently not been done any favours by the fact that some un-observant imbecile of an inspector from the AA had the blind oversight to stamp it with an undeserved 5-star. On a semi-positive note, if you don’t mind having a glass of champagne spilt on you, then the afternoon tea was otherwise second-to-none and boasts one of the most respectable views you will find anywhere in London.

PS. Don’t get me started on the heater in our suite; it was built into the ceiling, which meant that when it temporarily worked we had cold feet and a piping headache, but thereafter it just blew out cold air from fans that squeaked and rattled continuously.