The newest international luxury apartments are offering more space than ever. Over the last few years there has been a growing demand for city homes which occupy entire floors and multiple levels allowing wealthy buyers to purchase more space without sacrificing the convenience of a city location. Developers have cottoned onto the trend and some of the newest constructions are now offering truly super-sized residences.

Described as ‘Mansions-in-the-sky’, Miami’s futuristic real estate project promises some of the most exceptional homes ever conceived including the spectacular Palazzo d’Oro penthouse which will offer 360° views and will cover 15,016sq ft (1395m2) spread over two floors, with a price tag of $55 million.

This Frank Gehry-designed helical tower is home to 12 unique apartments ranging from 6,000 to 6,900 sq ft (560 to 640m2) in size including two duplexes each with a private swimming pool. The 9th floor apartment was sold last year for $58.7 million, breaking all of the city’s past records for luxury real estate. 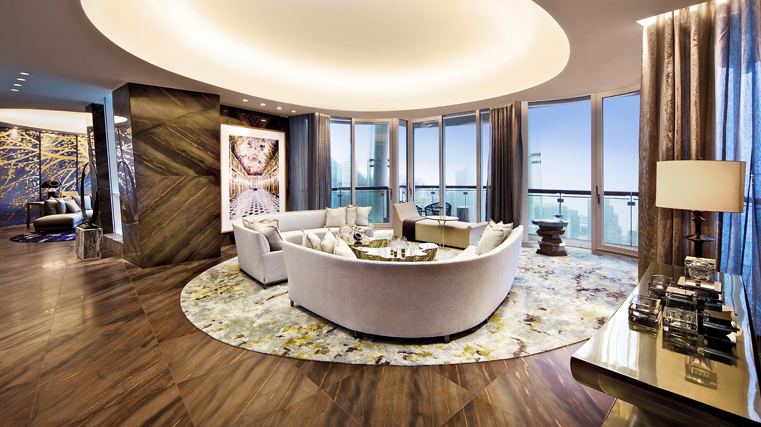 Also known as the Vauxhall Tower, this new luxury development overlooking the Thames is still in the stages of construction and will eventually reach 50 floors offering spectacular views over the capital. The 223 apartments have already been attracting buyers with the triple penthouse of 17,997 sq ft (1672m2) having already having been snapped up.

The Big Apple’s prestigious luxury skyscraper is due for completion this year and was arguably among the first to set the current trend for sprawling city apartments when it was presented back in 2011. The tower’s luxury homes include an enormous penthouse of 10,990sq ft (1021m2) which has already been purchased for $95 million.

Rising to 49 floors and offering over 70 exclusive apartments, the Odéon is destined to become one the most sought-after addresses on the Riviera when it is completed in 2015. As well as being the tallest building in the tiny principality, the tower’s  magnificent Sky Penthouse is planned to sprawl over an immense area of 35,521 sq ft (3,300m2)