Arguably the most exciting show of the week (in a week of enthralling episodes) took place today at LFW in the resplendent Kensington Garden tent, without doubt the most fabulous London show venue of them all. This 156 year old global brand, with a self-professed, ‘distinctly British attitude’ clearly showed how and why it has become one of the, if not, the UK’s premier designer brand.

Although the line showcased some stunning menswear, a noticeable aspect was its striking femininity with body conscious pencil skirts, peplums, fitted jackets and waist cinching bow belts. Whilst the pieces looked fabulous on the gorgeous and typically slender models, led by Cara Delevingne, you could imagine this particular collection looking magnificent on an array of shapes and sizes. Country attire could, for some women, bring perturbing thoughts of shapeless woollen coats and wellington boots to mind but this Burberry Prorsum Autumn Winter 2012 Collection at London Fashion Week brought a whole new meaning with its sumptuous textures and womanly shapes.

The front row was almost as exciting as the show itself including famous faces such as up and coming actor (and current face of the SS12 collection), Eddie Redmayne, his Birdsong co-star and French actress, Clemence Poesy, fellow Burberry model, Rosie Huntington-Whiteley, and the British Fashion Council’s ‘young ambassador,’ Alexa Chung. Also among the glittering front row posse was actress Kate Bosworth who modelled an Autumn/Winter Burberry look as if straight from the runway.

Kate Bosworth wearing a look encompassing three of the stand out features of this collection; pencil skirts, owl prints and bow belts. 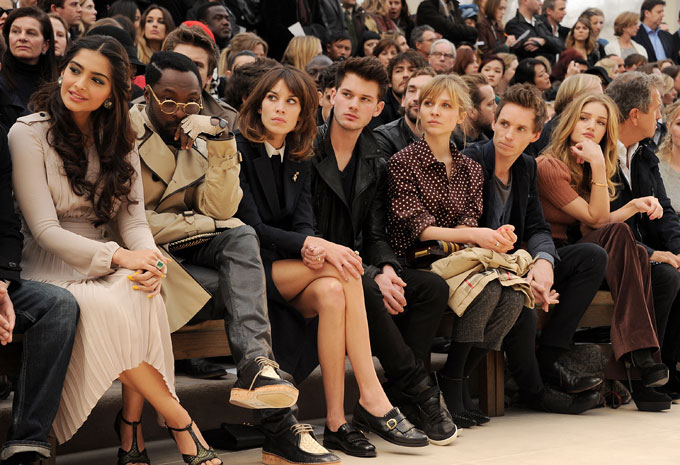 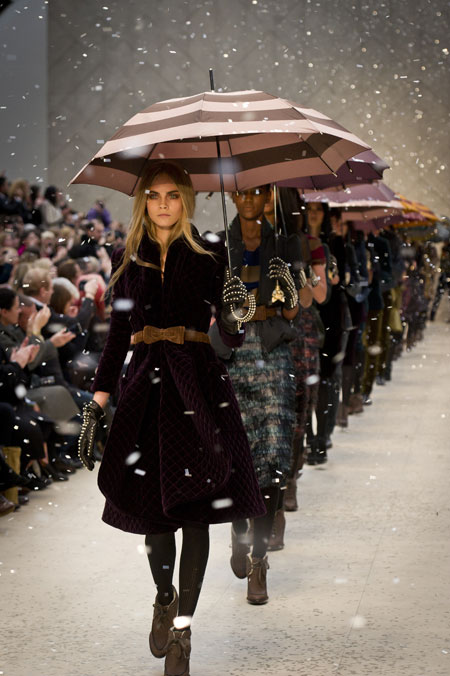 The colour pallet remained typically British conservative with hues ranging from olive, grey, burgundy, plum, mustard and brown in every shade. Florals also made an appearance towards the end of the show featuring on round neck dresses and peplum pencil skirts. And then the heavens opened as if to water the flowers just displayed before us and a downpour of foil rain arrived just in time for the models to show off this season’s striped umbrellas. Nothing, however, could have dampened the audience’s spirits after witnessing such a transcendent display of fashion mastery.