“Making a film means first of all, to tell a story. That story should never be banal. It must be dramatic and human. What is drama after all, but life with the dull bits cut out.” – Alfred Hitchcock (1899 – 1980)

Passionate craftsmanship and pioneering design are the forces behind Montblancʼs Alfred Hitchcock Limited Edition, an electrifying tribute to the inventor of the psychological thriller genre. The British filmmaker and producerʼs horror classics such as “Psycho” and “Vertigo” brought cinema to a new level of artistry, technical innovation and unconventional storytelling. Hitchcock became renowned for taking audiences on a rollercoaster ride of extreme fear and anxiety.

Using multiple camera angles and engaging in a unique form of voyeurism, he would leave viewers to imagine the brutality of crimes by only showing limited graphic violence on screen. His sophisticated techniques and ingenious editing allowed him to draw audiences into his world and play with their minds. Both editions, the Alfred Hitchcock Limited Edition 3000 and Limited Edition 80 bring to life his genius and tell the story of his extraordinary contribution to the art of filmmaking. 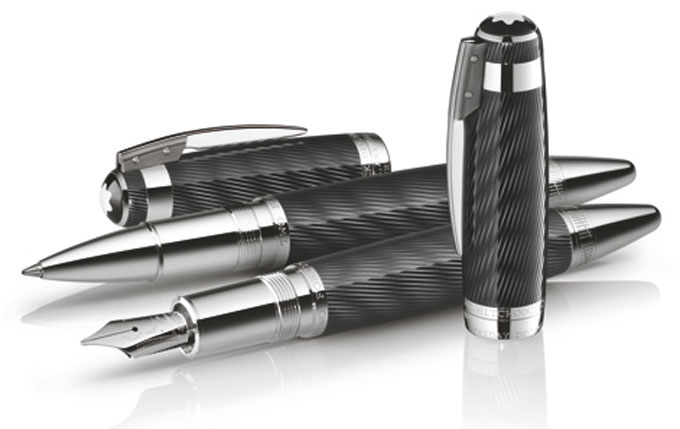 Many of Hitchcockʼs scenes remain the most memorable in movie history, forming the inspiration for the design of Montblancʼs Limited Edition. The dark staircase featured in his masterpiece “Vertigo” (1958) influences the overall design of these pieces. In this pivotal scene, the main character races frantically up the stairs before experiencing a crippling bout of vertigo as he sees the stairs stretch away from him. The textured dark precious lacquer of the cap and barrel of the writing instrument creates a special effect reminiscent of Hitchcockʼs infamous “vertigo effect”.

What could be more spine chilling than the unforgettable 45-second shower scene from Oscar-nominated “Psycho” (1960) when a young woman is brutally murdered in cold blood with a knife? The weapon remains emblazoned in the mindʼs eye long after the screen goes dark. This sinister knife is featured prominently on the writing instrument, as the penʼs clip.

As a reminder of Hitchcock the iconic filmmaker, the Limited Edition 3000 features on the 925 sterling silver rings engraving of the notes that would have identified the original film reel of “Psycho”. The 925 sterling silver cone of the writing instrument features 53 hatch marks symbolising every movie that Hitchcock directed during his impressive career spanning nearly six decades.

Not just macabre but also humorous, the filmmakerʼs comical cameo appearances in his own works became his very own trademark, fascinating audiences worldwide. His distinctive profile remains an enduring cultural image to this day. Because it was nearly impossible for him to engineer an appearance in “The Rope” because all the action takes place in one apartment, Hitchcock placed a neon sign of his famous self-portrait sketch in the city skyline outside the window. This very sketch enriches the 18K rhodium plated solid gold nib of the Limited Editions.

As a mark of the quality and craftsmanship of these pieces, the Montblanc features at the very summit of the writing instrument. The Limited Edition 3000 is available in 146 size Fountain Pen (3000 pieces) or Rollerball with marathon refill (3000 pieces), both with 925 Sterling Silver Settings. 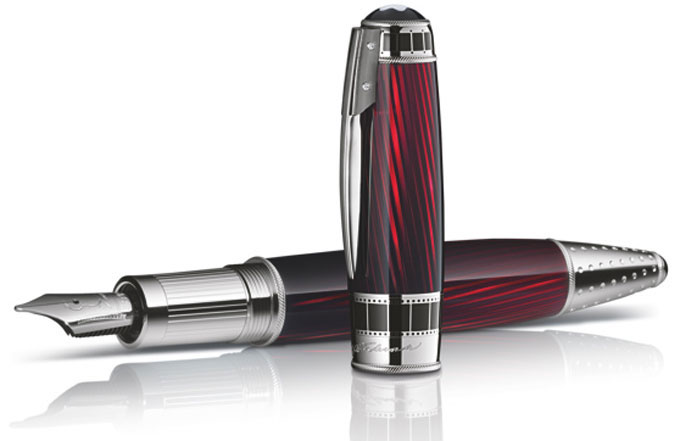 Alfred Hitchcock is considered by many to be one of the most influential filmmakers of all time and a true cultural icon. Honouring his outstanding contribution to the art of
filmmaking, Montblanc has created an Edition in 750 white gold, limited to just 80 pieces. Featuring the dramatic swirling vertigo effect in black lacquer enhanced with red reminiscent of the blood-stained crime scenes of his films. In addition, the “Psycho” knife clip is enriched with diamonds.

The Edition features some additional details reflecting his mastery of fear and fantasy. Hitchcock pioneered so many techniques that revolutionized the way thrillers and horror movies were directed. One device in particular was created to add tension for the spectator: by feeding the audience information that the filmʼs characters didnʼt have, he ensured surprise and alarm in the viewer. This device is very apparent in “The Birds” (1963) when a menacing swarm of killer crows gather for an attack on a playground while the main characterʼs attention is directed elsewhere. Symbolizing the craft that Hitchcock devoted his life to mastering and re-inventing, the cap rings of the Limited Edition 80 are encircled by a stylised roll of celluloid film – a directorʼs ultimate tool. Hitchcockʼs ultimate goal was to bring his audience under his spell, allowing them to be led exactly where he wanted them to go. He challenged himself to tighten his grip on the audience to the maximum when he shot “The Rope” (1948), a film shot all in one location, almost entirely without cuts or pauses, thus capturing every possible angle and perspective. The rope sinuously wrapped around the fountain penʼs cap and barrel rings and cone, refers to the murder weapon in this unique piece of filmmaking, also Hitchcockʼs first shot in colour.

With all its intricate details and symbolic references, Montblancʼs Alfred Hitchcock Limited Editions are a fitting tribute to a memorable entertainer and an enduring legacy.