The Halcyon Gallery will open its new premises on London’s upmarket New Bond Street on 5 December 2011, showcasing an exhibition by Dale Chihuly.

“Returning to London to show this important collection of work is truly exciting. The inaugural exhibition at Halcyon Gallery, in such an incredible building, presents the ideal space to show this work – I’m pushing the boundaries of the medium as far as they can go in terms of scale and new techniques all the time.” – commented Dale Chihul

The launch of their 12,500 square foot 144-146 New Bond St art-space is the forth London location for them, which extending over three floors, demonstrates the gallery’s commitment to its artists, presenting them with the best possible exhibition space, and international exposure, on a street which has been the hub of the London art world for over 150 years.

Paul Green, President of Halcyon Gallery comments: “The launch of our new gallery comes at a pivotal and exciting time for the art-world in London, with many new galleries opening, an increase in public art installations, and a significant rise in exhibitions of international importance in the city. The new space will enable us to take on more artists, to expand our programme, and deliver ambitious, challenging installations, beginning with our inaugural Chihuly exhibit.” 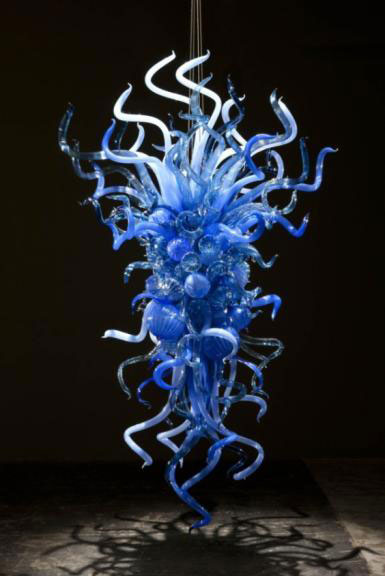 The timing of this exhibition is significant for Chihuly, as 2012 will mark fifty years of the International Studio Glass Movement. Chihuly is a founding member and leading protagonist of the Movement, which started from humble beginnings in America in 1962. Since the early days,Chihuly has done more to revolutionise how glass is perceived as an art form worldwide, than any other artist working with the medium.

The Chihuly exhibition will occupy all three levels of the new gallery space and will feature new site-specific installations, as well as drawings and paintings by the artist. Works across the glass series, which Chihuly has developed throughout his career, since the 1970s, will be represented in the exhibition. Chihuly’s exotic forms, which burst with rich, vibrant colours, include Cylinders and Baskets in the 1970s; Seaforms, Macchia, Venetians, and Persians in the 1980s; Ikebana and Chandeliers in the 1990s; and Mille Fiori in the 2000s.

Chihuly explains, “Over time I developed the most organic, natural way of working with glass, using the fewest number of tools that I could. The glass looks as if it has come from nature. I don’t really know where the ideas come from. They come from a lot of different places. One of the most important inspirations for me is the glass itself, the glass blowing process, this wondrous event of blowing human air down a blowpipe and having this form appear. I’m obsessed with color—never saw one I didn’t like.”

Chihuly is internationally known for his ambitious architectural installations around the world, in historic cities, public museums and private homes and gardens. Three of the artist’s large Chandelier installations will feature in the exhibition. Stylistically over the past forty years, Chihuly’s sculptures in glass have explored colour, line, and assemblage. His work ranges from single vessels to indoor and outdoor site-specific installations, including ‘mini-environments’, and large, serialised forms displayed in groupings on pedestals, or attached to specially engineered structures that dominate large exterior or interior spaces.

Chihuly’s work is widely known and collected in the UK. He is perhaps best known here for the important ‘Chihuly at the V&A’ exhibition at the V&A Museum in 2001, and his impressive 27 foot high V&A Chandelier, commissioned to herald the exhibition, which remains in place as a major permanent exhibit over the grand entrance hall. The iconic piece has been seen by millions since its installation. The V&A Museum exhibition was followed by a large site-specific installation ‘Gardens of Glass, Chihuly at Kew’ at the Royal Botanic Gardens, Kew in 2005, which was seen by 860,000 people.

A 200 page catalogue for the Chihuly exhibition at Halcyon Gallery will feature an extensive essay by UK art critic and broadcaster Matthew Collings, who comments,

“The mood of positive energy in Chihuly‟s sculptures leaves no room for sneers or nihilism, nor for chin-stroking philosophising, or airy spirituality; in fact their sheer exuberant, material joyfulness makes them unlike much else that is considered centre-stage in contemporary art. They are exotic, shocking, striking, and subtle. They have unavoidable colour impact and they deal in absolutes.”