One of the world’s most respected fashion labels, the sophisticated Italian brand, Prada release their Autumn Winter 2012 campaign exposing a few familiar faces in the menswear department.

Photographed by Seven Meisel, Prada’s Autumn Winter campaign provides the set for a virtual labyrinth of fantasy and reality. A futuristic theme is prominent through the models careful poses and arrangement amongst a red and white video game-esque enclosure. Featuring models including Anne V, Elza Luijendijk, Iselin Steiro, Madison Headrick, Magdalena Frackowiak and Vanessa Axente, the precise angling and elegant body positioning of the models echo the geometry of the scene. Camera angles are shifted to create a playful illusion of perspective and proportion.

Blocks of coordinated colour created by clothing, dip-dyed hair and furniture produce a chromatic architecture for our fashion avatars. Structure and play is reflected in clothes and accessories, where plexi and sequin embellishments are constructed to look like embroidery and flirtatious daisy appliqués are arranged into formal repeating motifs. Manmade linear furnishings in orange, purple and monochrome accentuate the gem-coloured prints of suiting and accessories. Proportions are continually played with, as bags in the accessories campaigns appear larger than life. The effect of the campaign is a new take on beauty a futuristic vision of fantasy and desire. 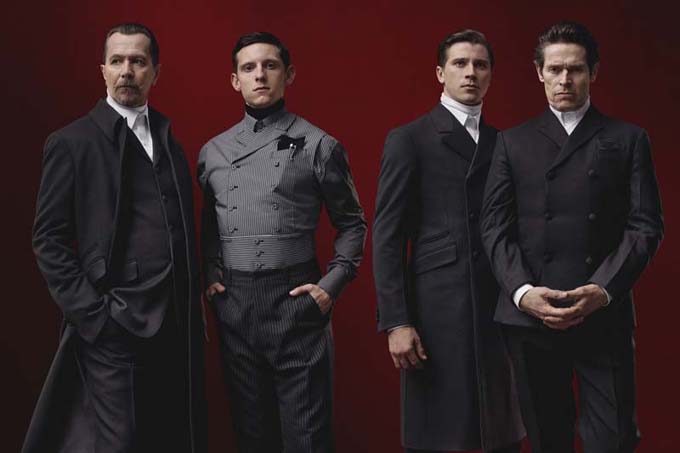 Shot by David Sims, Prada’s Autumn Winter Menswear collection presents models like portraits hung in the halls of a modern palace. The collection captures four of Hollywood’s leading men; Gary Oldman, Garrett Hedlund, Jamie Bell and Willem Dafoe in a contemporary character study. Together the four iconic screen actors, each at a different point in their careers, represent a cross-generational broadening of the face of Prada Menswear.

A cardinal red background speaks of ceremony and theatre – the light accentuating the cut of a sleeve or the slope of a coattail – while each man transforms the clothing into a costume for their own unique performance. This menswear campaign juxtaposes the futuristic vision of the womenswear by representing the more traditional theatrical part of the fashion industry.