It’s the start of the year and temperatures are barely above freezing, which means it’s the perfect time to think of your holidays for the year ahead. Read on for my guide to the most exclusive new luxury hotels openings to look forward to throughout 2013.

Velaa Private Island is due to launch in the summer of 2013 with 43 villas, a part of the Noonu atoll, 45 minutes by seaplane from Male International Airport. The name comes from the sea turtles that nested on the island over the years, which also impacts the design and feel of the private island hotel.

The centrepiece of the island will be the Tavaru Towers, a striking ivory-white structure, which will house a Teppanyaki restaurant with live cooking and a wine cellar.Velaa Private Island will also feature a six-treatment-room spa, a yoga pavilion and a well-stocked library.

Opening Autumn 2013, Point Yamu will be COMO’s first Thailand hotel outside Bangkok. Point Yamu will have 79 room including 30 villas, along with a spa, two restaurants and views out to the limestone karsts of Phang Nga Bay and the Andaman Sea. A few private residences will also be available to purchase.

Located in the hub of the business district and close to the Marina Bay financial centre, Sofitel So Singapore, opening in July 2013, will blend style and personality with a chic Singaporean twist. 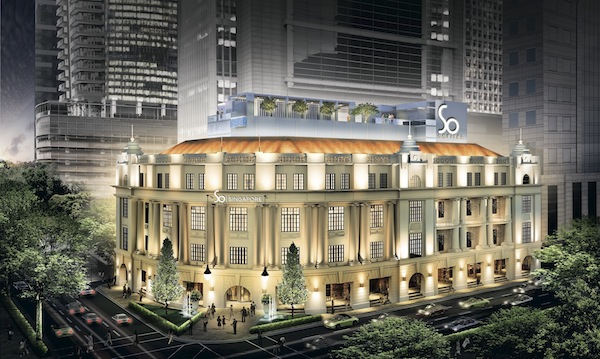 Housed in an iconic building with a neo-classical façade, the hotel will features the latest technology for lifestyle and business mixes with a funky interior design theme, representing modern Singapore whilst still preserving the building’s heritage. The Sofitel ‘So’ label are a group of boutique hotels centred around contemporary design.

Orient-Express will open its latest American hotel in Santa Barbara, California, approximately 90 minutes from Los Angeles. El Encanto counts seven-acres of landscaped gardens as home, along with views of the Pacific Ocean from its hilltop position.

El Encanto will feature 92 California-style bungalows with a full service spa, and a restaurant featuring Californian coastal cuisine and a Santa Barbara dedicated wine list. For further information or to make a booking please visit www.elencanto.com.

Originally a 19th century palace, the hotel has 176 rooms and suites, a glass-topped spa, 2 signature restaurants and the Xander Bar. The hotel is a short walk from the city’s vast historic and cultural attractions and is scheduled to open in the spring of 2013.

The Oetker Collection has some of the world’s finest hotels as part of its portfolio (Le Birstol in Paris, Isle de France in St Bart’s and Hotel du Cap Eden Roc, for example), but 2013 will bring the addition of L’Apogee in Courcheval on 11.12.13.

L’Apogee will comprise 53 spacious rooms and suites, as well as a penthouse with its own jacuzzi and private terrace. L’Apogee’s restaurant will be under the supervision of two-Michelin star Chef Yannick Franques (who also oversees sister property Chateau Saint-Martin & Spa in Vence). The hotel will also have its own private ski lift and a spa and wellness centre.

If you would like London’s premier concierge service to help plan your next holiday (with access to great rates and complimentary amenities), contact Emyr at Bon Vivant.