The drive up towards Croatia’s first Design hotel (of exclusive lifestyle brand, Design Hotels AG), is somewhat reminiscent of nearing a seaport. The enormous, stunning white Y-shaped building resembles an ocean liner from the outside and is evocative of the Guggenheim museum, New York, as soon as you walk into the statuesque six-storey lobby.

The 248-key Hotel Lone, was built in 2011 and is a contemporary take on its classic 1970’s predecessors. Nestled in the centuries-old Zlatni Rat (Golden Cape) Forest Park, a coastal reserve on the Istrian peninsula, this Adriatic greenhouse has clearly been inspired by its location. Everything from the hanging gardens, to the falling ivy, to the use of mirror and glass panels allowing the lush forest in, screams the calm of nature. 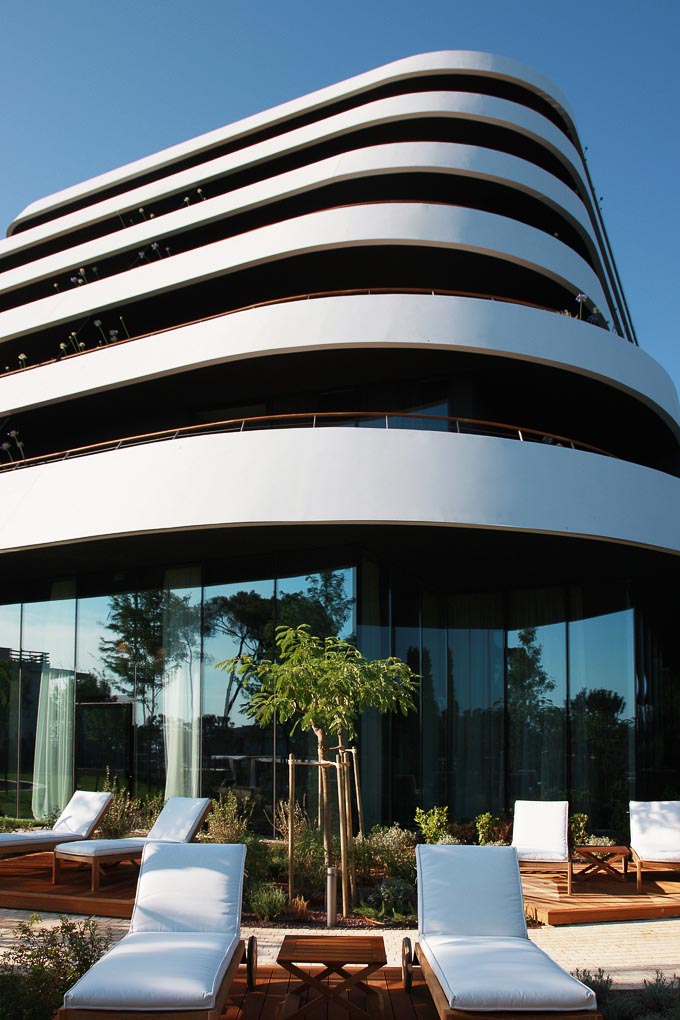 Described as ‘stark-meets-sexy’ by Conde Naste Traveller 2012, the magnitude of everything down to the fine detail is very much ‘designed’, and the clever use of space only magnifies this. The colossal structure comfortably melts into the surrounding pine forest which penetrates the interior at every opportunity. Under lead architect Silvije Novak, this project was realised by an all-star team at Croatian architectural studio 3LHD.

Not too distant from the likes of a gallery, this artistic gem is peppered with rich murals and installations throughout. The atrium houses their signature piece, Room for Running Ghosts, a giant suspended steel sculpture. Solid elements entwine without actually touching, giving the impression of weightlessness and suspension. The light and airy theme, along with the seductive minimalist curves continue throughout the hotel. Every room has a different light installation; during the day they blend into the background, dematerialising. When lit, translucent shades create an ambience of unpretentious comfort. Wood, stone and fabric panels in natural muted tones comfortably contrast the black and white walls. The custom-made furnishings reflect the colours of the beach, in white, beige, stone and sand tones. The bathroom is separated by a glass wall, allowing further penetration of natural light, which makes for an even more pleasant morning ritual. Although I didn’t get one of their jacuzzi terraced rooms, the treetop views from my terrace are quite spectacular; the building is designed to ensure each guest room has a sea view or views onto the surrounding pine forest. Waking up feeling like I was in a palatial tree house also took the edge off early mornings.

The Lone is the host venue for the RC44 World Championship Regatta, essentially the purpose of my visit. For the second year running, the grand finale has been held at the ACI marina, a stone’s throw away from the hotel. After the long days out at sea, the hotel’s wellness spa offered the perfect way to unwind. Following a dip in the fresh-water pool, the 70-minute Lone Signature massage almost sent me to sleep; it felt like two people were working on me which is always a good sign of a sensational massage. The 1700 square metre spa that connects to its sister hotel, Monte Mulini, offers the usual suspects: saunas, steam, a state-of-the-art gym – but with an edge. I stumbled across a concealed doorway; all felt rather Mi5 in my terry towel robe, after I accidentally pushed against what turned out to be a floor-to-ceiling revolving door, leading to a very dark place with a menu of hydro heavenliness. After peering around the corner, I noticed what can only be described as a submerged grotto: two joint sunken rooms, sporting everything from waterfalls, to water jets, to hydro-massage seats. Calling, like a diminutive yet highly sophisticated water park, I was drawn in. Apparently inspired by the ritual baths of the Jewish culture, Mikveh, which were originally used for ritual cleansing, the blackened rooms create an intimate calming atmosphere. 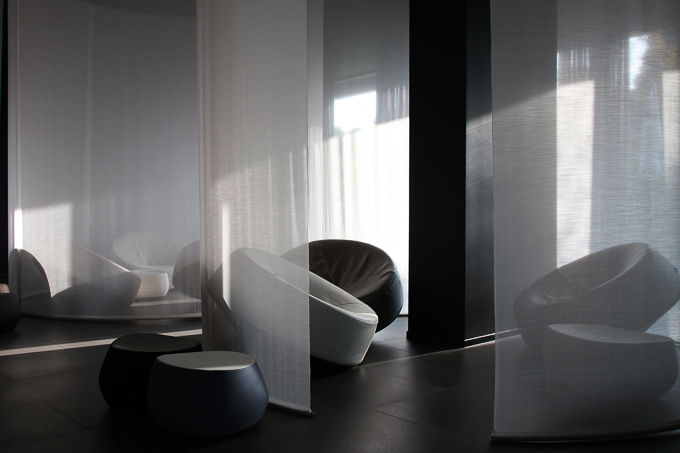 In a nutshell, I can only describe this star ship of wellness as Alice in wonderland meets Ian Schragar – light years ahead, with all the well placed oversized pots and pods, secret rooms, clever lighting, use of shape, and of course the space-age gadgetalia.

From food for the soul to the hotel’s culinary offerings: the Lone has three, aptly named, L, ON and E. L is their a la carte restaurant, offering traditional Croatian cuisine. The buffet breakfast was served at ON; I sat on the terrace because I couldn’t get enough of those views. E is their signature seafood bar, which is always well supplied given their pole position by the coast.

The hotel also boasts extensive conference facilities, with a capacity for up to 3000 delegates. During busy periods it can feel anything but intimate, giving the impression of style over service.

After breakfast, I took a bike ride around the Golden Cape. The hotel offers free bike hire and boat rides to guests. With the wind in my hair and the lush greenery to my left, complemented by the clean blues of the water to my right, it was a picture-perfect morning. Spoilt by the coastal vistas, I felt like a change of scenery, so I took a walk up to the quaint old quarter of Rovinj. Perched high up on the peninsula, just 10 minutes from the hotel’s adjoining pebble beach stands this charming showpiece town, surrounded by Venetian houses with terracotta roofs. The central square spreads out on to a beautiful harbour and is edged with lively cafes and restaurants. The branching narrow cobblestoned streets are adorned with colourful galleries and shops, filled with local arts and crafts. The 18th century church of St. Euphemia dominates the skyline.

The Lone has just won the European Hotel Design Award for best newbuild. With less than a two hour flight from London to Pula, this hidden gem is definitely worth a visit.