After attending London Collections: Men that ran from 15th-17th June, it is easy to say that the Hackett London show was definitely a stand out. This was the quintessentially British brand’s first ever showing at Fashion Week, and they didn’t go out half-heartedly. The Spring Summer 2013 collection was showcased at the debut catwalk show held in the majestic surroundings of the Royal Opera House, a fitting setting for the unique spectacle. Spotting David Gandy on front row made for the perfect extra touch too! 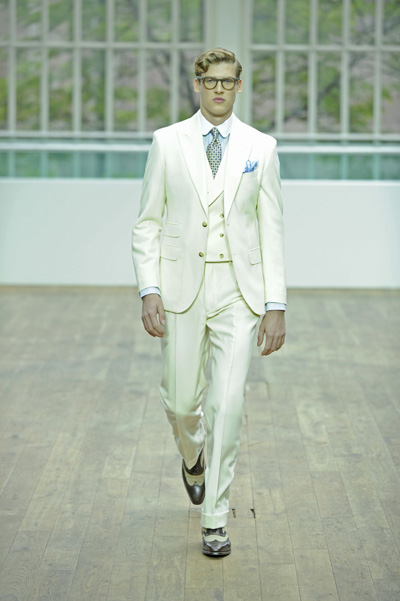 Mediterranean artistic endeavour dominated part of Hackett London’s Spring Summer 2013 collection revisiting a period when artists such as Picasso and Matisse ruled the Riviera. This bohemian, laid-back style of living best worn layered and with languor where superfine luxury knitwear is casually draped over the shoulders. Blazers were worn over shirts and Breton stripe tops becomes a vital wardrobe staple as well as the more brave paisley print separates. The palette was bright mixing vivid colours balanced with muted tones provided by the landscape.

Solid associations with characteristically British establishments and events such as the Oxford and Cambridge Boat Race were also seen. The boathouse theme channelled the sporting spirit and preppy dressier side of sporting life in Union Jack colours of navy, rich red and antique ivory. A deconstructed lightweight navy blazer with fine piping is the nucleus of the story and can be styled up or down with a variety of cricket sweaters, shawl collar knits and bow or silk knit regimental ties. The revived double pleat wide leg trouser works well with the new Hackett double-breasted jacket, which has been cropped for a more modern, youthful silhouette.

The most distinct theme for me though, was the obvious reference to the sartorial glamour of twenties Hollywood, ultimately presenting a nostalgic take on The Great Gatsby look. The inspiration was visible in the three-piece suits with double-breasted waistcoats and wide-leg pleated trousers and larger lapels making a welcome to the modern gentleman’s wardrobe. Or the more casual and light alternative of seersucker jackets, baker boy caps, cream lined peaked lapel suits paired with white brogues. Hackett London managed to bring a new modernity to the elegance of the characters in the iconic F. Scott Fitzgerald novel. Focusing on lightweight fabrications with suiting cut from wools, linens, silks and cottons, Hackett’s signature tailoring manages to make the recollective style of the twenties extremely wearable. In a palette of cream, ivory, bone and summer white teamed with tobacco and mocha tones, the story heralds a new era of sophisticated summer dressing.

Lest we forget the grand finale, consisting of an 18-strong phalanx of models carrying the traditional City accessories and wearing dapper double and single-breasted suits that closed the show. Finishing on a more British note that the label is better known for, the Hackett London boys trailed the catwalk in traditional banker style bowler hats whilst carrying brollies, solidifying the nostalgic undertones of the collection.

Other key themes shown were Desert Rally style ‘British Explorer’ look and Jamaica carefree Caribbean lifestyle trend. The collection as a whole gave a uniquely modern approach to evocative sartorial style with literal inspirations made entirely wearable. Every piece in the Spring Summer 2013 collection was given the signature Hackett London style framed by the theatrical setting of the Royal Opera House, that made for the perfect opportunity for the brand to showcase their Best of British approach to men’s style and show an international audience exactly what its home town has to offer.