In addition to her fantastic musical career, Pixie has her own clothing line ‘Pixie Lott for Lipsy’ and a new range will launch all across the UK and Ireland on September 26th through Lipsy as well as key Lipsy wholesale partners including Asos.com, Bank, Very.co.uk, Selfridges, House of Fraser and Next.co.uk

Add to this, Pixie Lott is back with a brand new track called ‘All About Tonight’, which premiered on UK radio on Monday the 11th of July. The highly-anticipated single will be played in the build-up to the popstar’s second album, which Lott will be releasing on November 7th. After releasing her debut album ‘Turn It Up’ in 2009, Pixie continued to reach higher and higher levels of success which led to ‘Turn It Up’ reaching triple platinum status and has been on the charts for a phenomenal 95 weeks. With two #1 singles also under her belt, the 20-year old has the pop scene firmly grasped and her fans can only wait for her second album to drop this autumn.

Pixie starred as a guest judge on last year’s X Factor alongside Cheryl Cole, Simon Cowell and Louis Walsh. Last December, Pixie performed her first headline tour and it sold out within hours. Pixie is also one of the most talked about artists on the social networks, with over 1million friends on Facebook and 500,000 Twitter followers. There’s not much Pixie hasn’t done in terms of achievements and we expect that her fourth collection with Lipsy will be the best one yet. 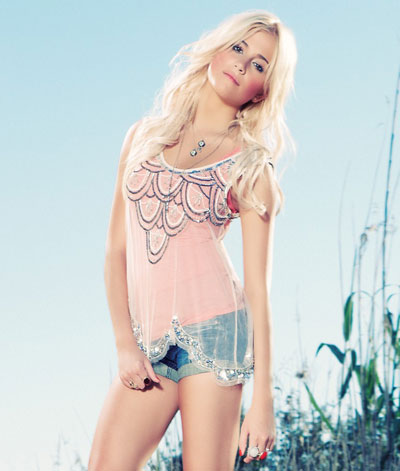 Commenting on the new collection Pixie said: “I love designing my own clothing line with Lipsy. I still need to pinch myself when I think about this being my fourth clothing range and I’m still only 20. The new range is the best one yet.” Jeremy Stakol, CEO of Lipsy, said: “Everyone at Lipsy adores Pixie. She is a modern day fashion icon and we are privileged to be working with her. Our customers love everything Pixie does and I’m sure they’ll be blown away when they see the new Pixie Collection this September. Pixie is a pleasure to work with and we’re backing her to get to number 1 in the charts with her new album”.

(picture from current range at Lipsy.co.uk)