Italian industrial designer Michele Puzzolante has designed a conceptual luxury floating hotel, the Solar Floating Resort (SFR). Convinced that solar energy is the solution to global warming and environment issues, Puzzolante decided to get involved in the green energy new era by inventing a unique building integrated photovoltaic concept totally self-sufficient energy generator, non-polluting and in unison with its natural surroundings. Entering an age of advanced construction techniques based on industrial design rather than traditional architecture, this concept is certainly intriguing.

Michele Puzzolante’s invention is based on a new structural element that is composed of a fifteen-millimeter outside skin and a fifteen-millimeter inside skin in balsa reinforced fiberglass. Thin films photovoltaic are integrated into the two skins to absorb sunlight energy from the outside and artificial lighting energy from the inside. Between the two skins there is a thirty-centimeter vacuum insulation to protect the habitation from outside heat as well as reducing the consummation of air conditioning to the minimum. Thin films photovoltaic absorb light from sunlight, low light conditions, cloudy skies, non-direct sunlight and artificial indoor lighting. Energy wasted in the electrical indoor lighting process can be recycled and stored back to where it comes from.

SFR is a unique building integrated photovoltaic hospitality concept, part habitation, part yacht and part submarine, totally self-sufficient energy generator, non-polluting and in unison with its natural surroundings. This hospitality product promises to enhance the standards of front beach hotels and island resorts bringing them to a seven stars level! Being designed with a luxury yacht and a luxury hotel suite in mind, this resort will offer the most deluxe and captivating of stays. 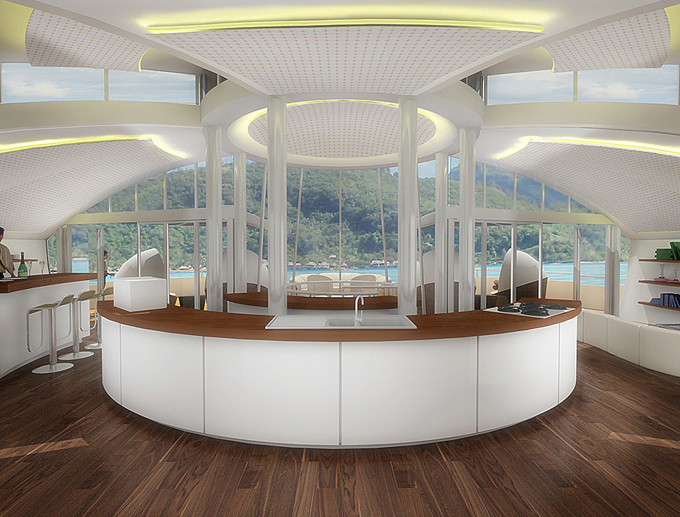 The most distinctive feature has got to be the fully submerged observation bulb. Built like a tourist submarine, it’s big enough for six armchairs with a thick glass enclosure that provides a 360 degrees view to enjoy the exotic fishes, dolphins, sharks and marine turtle that may swim by. SFR reaches twenty meters in length, is designed for six people at sea and is ideal for living in marinas connected to front beach hotels or island resorts. The hotel sleeps six with a premium on privacy, with two single and two double bedrooms, each with private a bathroom. A large kitchen, a dining area, a lounge area and a pilot room complete the 110 m2 interior layout, treated in the purest Italian style. Outside, the teak deck is set up with a large semicircular lounge and dining area, six individual day beds and a jacuzzi. 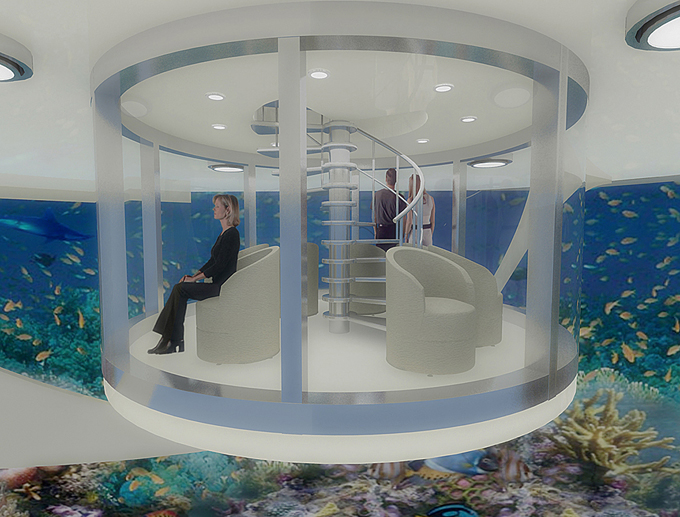 With an estimated 30,000 beach front hotels and island resorts around the world, the Solar Floating Resort concept has good chances of transforming into a reality. Furthermore, it sets a good example as using renewable and clean energy in any type of industry today is a must.