As the summer and the British weather are finally getting into the swing of things, the inescapable buzz for the London 2012 Olympic games is infecting us all and Cadogan Contemporary are no exception. This independent gallery based in Chelsea, is marking the unique occasion with a very special one-off exhibition.

Inspired by the incredible human endeavor displayed at the Olympics, artist Andrew Hunt is working on a series of 12 potent paintings; his quirky eye giving new meaning to the motto ‘swifter, higher, stronger…’ From the athletes to the audience, the fat to the fit, no-one who partakes in this landmark event is free from the deep sentiment of Andrew’s paintbrush. This new series of works is emblematic of the London Olympics and all the dichotomies of the British spirit.

We took a moment to talk to Andrew about his personal life, his fast-moving career and his plans for the big games…

Tell us about a few of these paintings. The reasons you chose the subject and what they mean to you. Were they a pleasure to paint?

I wanted to celebrate the London Olympics with a body of work that touches many different aspects of sport and human endeavour. I wanted to represent all ages, the glory and the pain. I certainly enjoyed the challenge of creating a number of pieces with a central theme, yet with each piece maintaining a standalone quality.

The Olympics started as a competition between Gods. You seem to bring them down to the everyday. Do you think athletes should not be revered in the way that they are?

I believe athletes are the ultimate performance artists, making huge sacrifices, enduring pain and striving to achieve to inspire us all.

Being the best at your profession is supposed to take 10,000 hours. Do you think that the commitment of being an athlete is similar to being an artist?

No pain no gain. I don’t believe you can be a good artist without immense passion and a lot of hours of ardent strife.

Your first major break into the art scene was the BP Portrait Award in 1995. Did that affect your painting and your career?

It was a massive moment in my life. I was 21, just graduated with a degree in graphic design and was about to embark on a career in illustration when I sold my first painting in the National Portrait Gallery.

The Olympics is a worldwide recognised event, and your work is deeply rooted in Sheffield. How do you see them working together?

‘The Mill Town Runner’ is obviously a nod to the industrial North, my homage to Lowry and a semi self -portrait with the terraced streets and the distant blue of the Pennine hills. It works as a counterpoint to the Usain Bolt portrait. Some of the pieces are about narrative and place, but some are rooted in the aesthetic of the Olympics- the beauty and power of human and animal form. 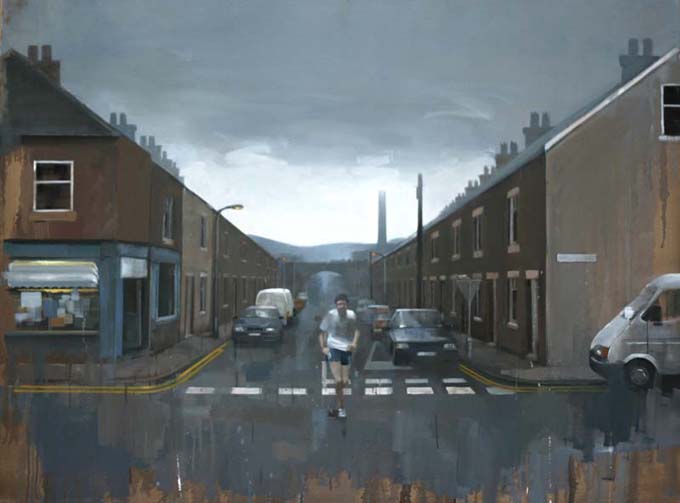 In this series you don’t just concentrate on the athletes but the spectators as well. Are both as important as each other to make sporting events such a big deal?

Of course it’s all part of the experience; a crowd harbours many interesting pictorial elements.

What will you be doing at the during this summer’s Olympics?

Thinking that I should be doing more exercise. I will probably do some push ups in the bedroom then crack open a beer, sit down and watch it on the tele.

If you were to compete in one Olympic sport, what would it be?

Growing up in the North West and going to Anfield as a lad my sport has to football, but I wouldn’t mind giving that Bolt guy a run for his money.

Who would you love to meet and paint?

I would like to do a posthumous portrait of Bob Paisley sat in his front room with his feet upon the European cup.

What do you aim to achieve with your art?

To stand back from a painting and enjoy what I have created. But it is immensely gratifying if other people enjoy the work too.

The exhibition will run from the 10th July to the 11th August, with an opening party (date to be confirmed).