Two artists with the same intense love of animals and the countryside; an art exhibition at the Osborne Studio Gallery 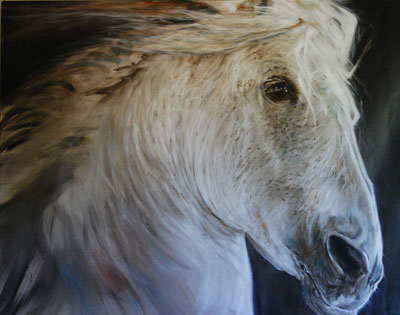 Dutch-born artist Hester van Wijngaarden, who has, since 1995, held many solo shows in France, as well as Spain and Holland, excels at the depiction of animals, especially elephants, horses and young fighting bulls. Her large canvases, in a limited palette of black, white and grey, using bold brush strokes, capture a fleeting moments of energy, power, grace and speed.

Hester looks after at least four horses, and many of the paintings in this current show are inspired by the beauty of her charges. She decided to live in France after studying art in Holland, and her home is now a small farmhouse, set in the deepest, untamed countryside of Lot et Garonne. She wouldn’t call herself an aficionado, but a fascinated observer of the Corrida. 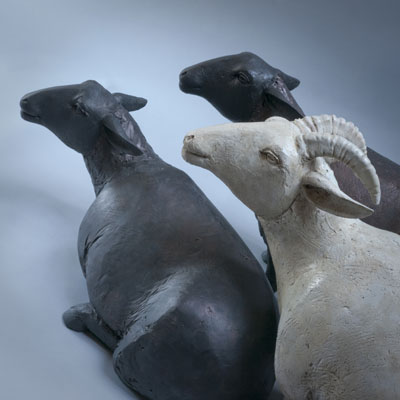 As the daughter of a distinguished regimental commanding officer, award winning sculptor Ann Campbell travelled the world as a child, absorbing influences and inspiration from East and West, from Sri Lanka, Burma and Malaya to Italy and Germany. One of her favourite sculptors is the Italian Marino Marini, ancient Egyptian art informs her new Nefertiti like heads..

She studied art, specialising in sculpture, at the Birmingham College of Art, and over the years her sculpture has been exhibited at numerous London galleries.

She now lives a rural existence in deepest Herefordshire, sculpting and casting her fire-clay works, also teaching at Malvern College and Hereford College of Art. She has always been devoted to animals, now makes do with only two hens and a powerful shire horse to ride along the lanes, astounding the locals. As a child she collected animals whenever she could – whether exotic monkeys or humble rabbits.

Her sculpture, often of animals, distils the essence of the subject into strong simplified forms,
with a tactile, sensual quality.