As first impressions go, The Mandeville Hotel certainly appears to tick all the right boxes, from the stately entrance triumphantly flying the British flag for Queen and country, to the attentive porter who immediately unburdens us of our luggage and ushers us through the glamorous Art Deco inspired foyer to the reception desk, where we are courteously greeted for check-in, before soon in the lift and on our way up to get acquainted with our 2nd floor deluxe suite.

Quaint, yet with a twist of contemporary, our deluxe suite was unmistakably feminine, with a pale hue of purple setting the tone courtesy of a shantung silk feature wall, patterned upholstery and cosily sumptuous curtains. The pink embroidered flowers on the cushions were definitely the final nail-in-the-coffin in terms of ultimate demasculinization for me, whilst the garish magenta blanket appears as an afterthought in a bid to inject some modernity into the otherwise elderly façade. 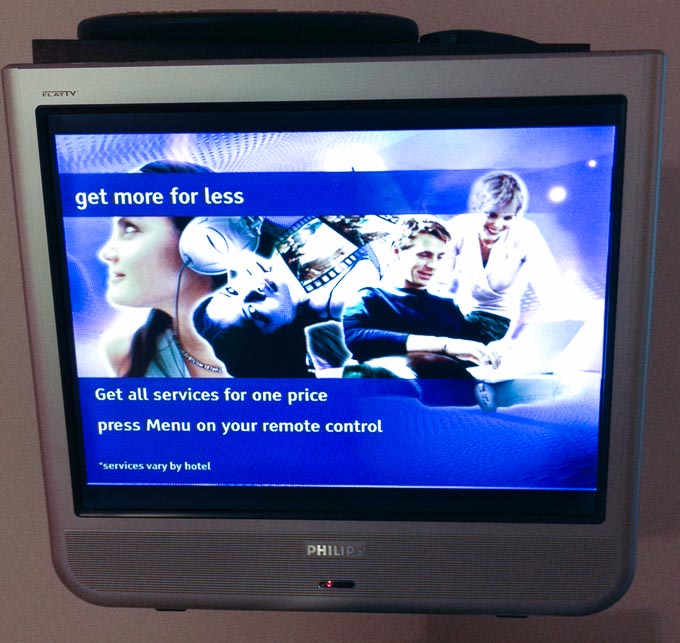 Visually the room layout made sense, but the small TV, that was hinged from the wall in such a manner that whilst viewable from both the bed or sofa, you had to strain your eyes and tilted head in order to see its dated little square screen, was utterly infuriating. In fact, given the extortionately priced on-demand films and music (£4+ to listen to one album from the TV’s speakers!!!?!), it was pretty clear that it must have only been installed as a formality. Immediately ditching this lost cause, I decided to sit down at the desk and finish off a few outstanding pieces of work on the laptop before dinner, where I equally gob-smacked to find that Internet access was another £15+ for the night. To rub salt in the wound, there was also no customary iPod/iPhone docking system, I therefore think it is pretty fair to summarise that this hotel is definitely not accommodative for businessmen or anyone who depends on technology.

There is however always two sides to a coin, and whilst The Mandeville will no doubt struggle to attract any young businessmen, when it comes to retail therapy, its proximity to Selfridge’s on Oxford Street, and the neighbouring designer boutiques of Bond Street and Marylebone High Street could easily see the shopaholic sex lining up in their droves to check-in here. Another potential market could be the new breed of ‘digital detox’ guests. 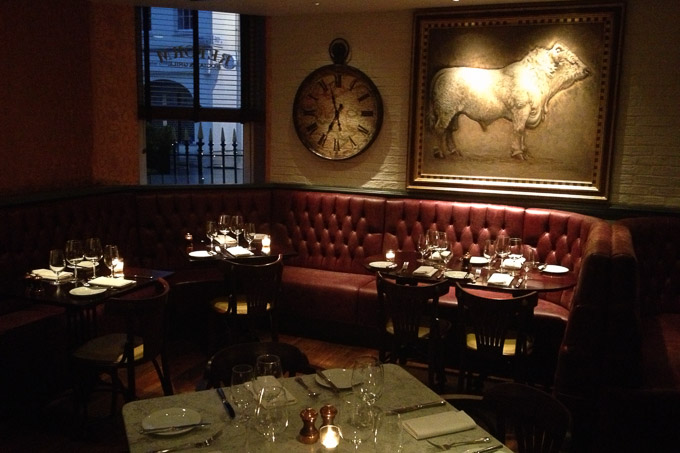 In stark contrast to the feminine charm of our suite, the hotel’s new (and therefore empty) Reform Social and Grill emanates more masculinity than a sports bar, albeit thankfully of the more sophisticated (non-loutish) breed, with deep red-leather upholstered booths, dark wooden flooring, a mix of marble and hardwood tables giving it the feel of a Gentleman’s Club. In case of any lingering uncertainties, the muscular bull that dominates the restaurant’s far-wall triumphantly broadcasts that this is most certainly the domain of the alpha male.

It has assuredly won me over, but I cannot help but think that maybe it is this unashamed manliness that has caused its eery emptiness. I can see it doing well as the destination for a business lunch, or perhaps an evening whisky, cognac or brandy, but given the feminine character of the rest of the hotel, it seems like it is alienating the very clientele that the hotel is so desperately trying to appeal to.

When it comes to the menu, this place is a quintessentially British affair, with appropriately titled dishes including: ‘Loch Duart Cured Salmon with English Cucumber Pickle & Soda Bread’ and ‘Fish & Chips with Pea, Mint & Tartar Sauce.’ 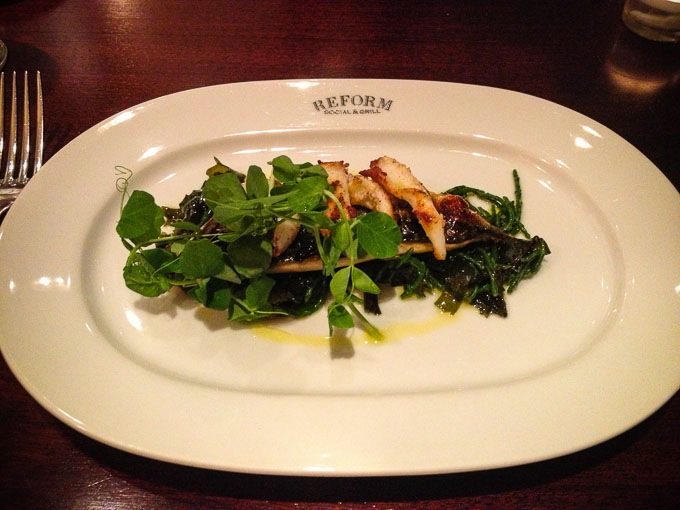 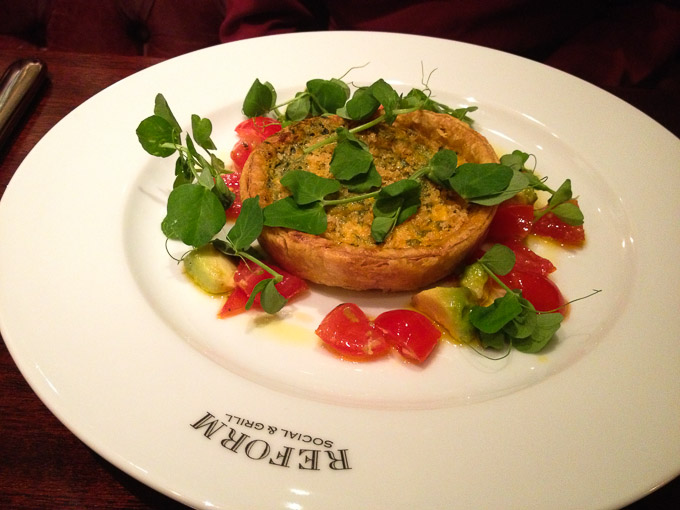 I started proceedings with Cornish Mackerel, Squid, Sea Pickle and Watercress, whilst my companion opted for Crab Tart with Avocado and Chilli. Although not breaking any new ground in a Michelin star gastronomic sense, all ingredients were as fresh and wholesome as any of London’s top tier establishments, original, unequivocally British and cooked to perfection, which instantaneously won us other and instilled us with a sense of anticipation for the main course. 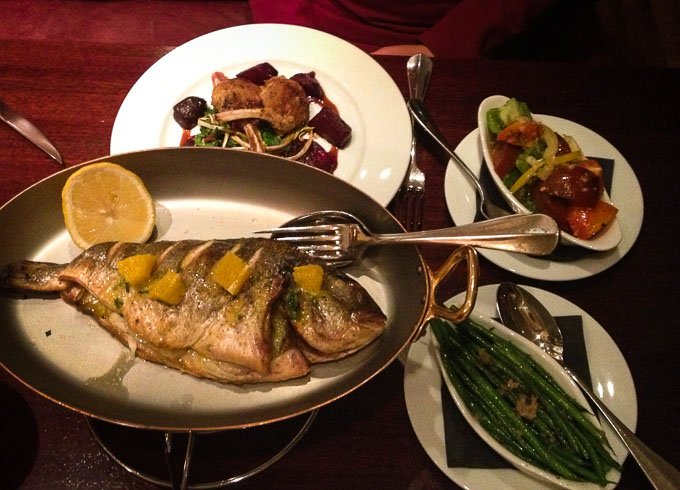 Having been made aware of my partiality towards seafood, our enthusiastic waiter suggested I go for their ‘Catch of the Day’ – Whole Cornish Sea Bream with Fennel, Orange and Chicory, which I have to say was supreme, with the twist of orange really adding a new dimension to it. A tender and succulent side dish of Green Bean with Shallots and Parsley proved the perfect partnering.

With a fondness for Lamb, my partner could not resist the Lamb Cutlets Reform, served with black truffle, ham hock, although was a bit surprised to find it served with beetroot, that was not detailed on the menu and not a very pleasant surprise given that neither of us were particularly keen on it. Her side of Tomato Salad was also sadly not the most inspiring choice on the menu. 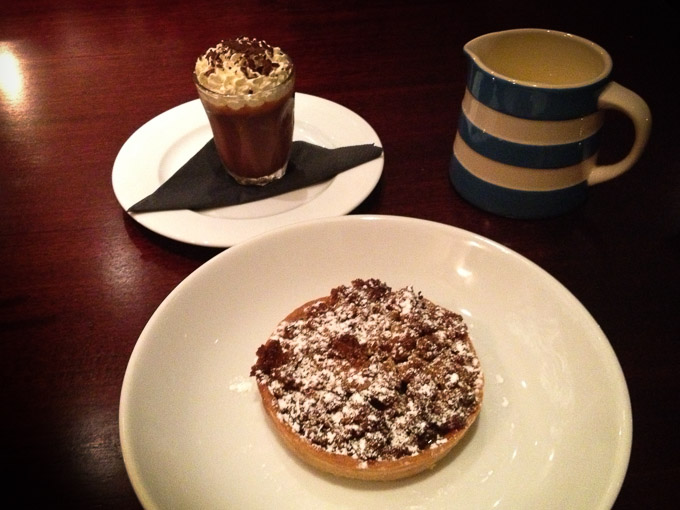 When it came round to dessert, I could not refrain from the irresistible temptation of Norfolk Treacle Tart with Jersey Pouring Cream, which having not had Treacle Tart for at least 10 years, and rarely seeing it on any restaurant menus, proved a winning finale that rekindled some childhood sentiments.

The Chocolate Pot with Amadei Chocolate and Salt Caramel that my partner went for was like a deadly sin in a glass, tantalisingly more-ish yet you just knew that you shouldn’t. 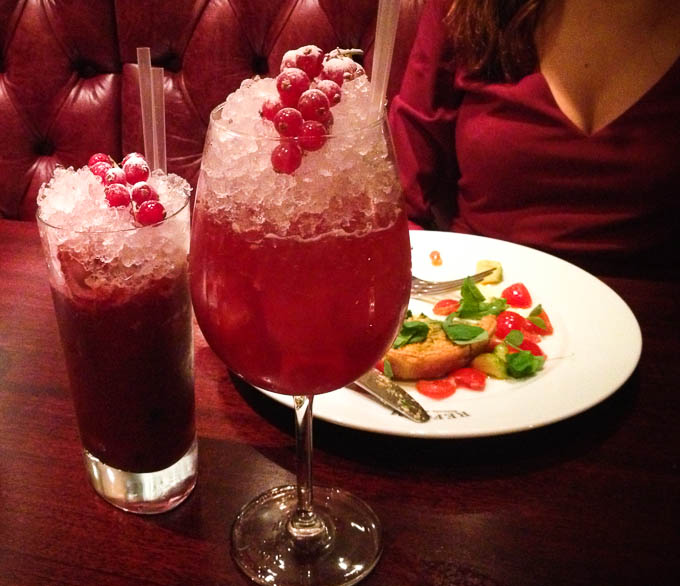 Three courses down and besides the Lamb Cutlets versus Beetroot debacle, we were both thoroughly impressed as a whole, and washed-down with some exotic cocktails was a real eye-opener that hotel restaurants are evidently not to be over-looked. In fact I would have to say that upon this occasion it was actually the restaurant that would be my reason for returning.

Also worthy of a mention was the very knowledgeable bar manager Vladimir, who is about as enthusiastic as they come and not only prepared us a wide array of enticing cocktails, but explained the history of gin and vodka for us, which included an introduction to the exceptional UK distilled Chase Vodka; namely the Marmalade variant that is definitely one to look out for.