Excuse my ignorance, but I was still under the impression that Japanese cars were basically just cheap (worse-looking) renditions of European cars? However, it appears that with the launch of the Lexus GS 450h F-Sport, they have defiantly turned this view on its head and created an arguably better-looking car, packed with more gadgetry than Q’s lab, and a median price tag of circa £7,500 more than the cost of its rivals BMW, Mercedes Audi and Jaguar.

Essentially Lexus is the luxury division of Toyota, which was created for the primary purpose of tapping into the US luxury executive saloon market, and chiefly to knock the Germans off their top spots. Now whilst being name-dropped on numerous Hip-Hop and R&B chart-toppers may have helped them sell to the Americans, this really did not help them shift units in the UK, …so much like Hummer sales then? …well actually far from it, it would seem …

The thing about Lexus is, that although the brand still doesn’t mean much to us Brits, the drive certainly does. It is one of those ‘from the inside, looking out’ affairs; when you are sat in the driving seat (or any of the seats for that matter), you feel special.

What’s more, the 450h F-Sport is a silent, eco-warrior hybrid car in Cities, but when in sport mode, ditch the automatic transmission and trigger the paddle shifters to take control of the 5.9 sec 0-62 mph sprint and then let the 338bhp 3.5 litre V6 take you all the way up to (an electronically limited) 155mph. Hardly ground-breaking you may say, but when you are sat in what is basically a luxurious armchair, in a private lounge listening to your favourite album through a surround-sound system that includes 17 individual speakers and behind the largest computer screen in any car, suddenly it all seems a bit surreal.

All models come complete with adaptive variable suspension, whilst the F-Sport version gets the added addition of ‘Lexus Dynamic Handling’, which includes dynamic rear steering, variable-ratio steering rack and electric power steering. In practice, this means that below 50mph the rear wheels steer the opposite direction to the fronts, to make it feel more nimble around Cities, yet steering the same direction as the fronts at higher speeds to increase stability. 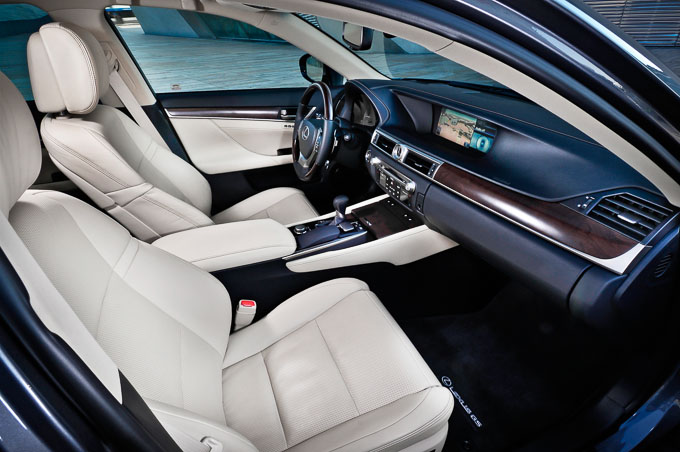 The interior is as plush as they come and makes E-Class and 5-Series contemporaries look under-equipped, and easily up there with premium spec’d 7-Series and S-Class models. The expansive 12.3” screen is operated by a built-in mouse, which resides where you would otherwise expect to find a gear-stick and despite taking a little getting used to, functions flawlessly, and much like an iPod, I am sure that even technophobes could get to grips with it.

The only downside was that the sat nav system did not appear to allow me to enter a complete postcode, instead trying to predict where I was going, which it repeatedly got wrong. It was not in fact until 2 weeks after I had handed the keys back, that Toyota HQ informed me that apparently I should have scrolled down to the second page of the sat nav menu in order to select the non-predictive mode. Whilst inevitably pretty frustrating for what I would assume is the most common command input for any sat nav, let it detract nothing from my overall opinion of the 450h F-Sport; regardless of my location or trajectory, being sat in the driving seat was an absolute joy and one of the most pleasurable living rooms that I have ever sat in, let alone driven.

If you are eco-conscience, don’t mind frustrating sat nav systems and have around £50,000 to spend on a luxury executive saloon, as well as being morally against buying a German car or a Jaguar, then this is clearly the car for you, and I am yet to find a contender more worthy of your cash.