An amalgamation of influences from two of the world’s greatest cities, Tokyo and Paris, is at the heart of this season’s menswear collection from esteemed French fashion house, Louis Vuitton.

Under the Artistic Direction of Marc Jacobs, Louis Vuitton’s Men’s Studio and Style Director, Kim Jones, explores the contemporary influence these two great cities have had upon fashion, resulting in a collection that combines the principles of Eastern elegance and Western reliability.

Calling upon the artistic flair of legendary American fashion illustrator, Antonio Lopez, renowned in the fashion world for his heroic vision of men of the seventies and eighties, Louis Vuitton’s most recent collection embodies an appreciation of luxury, and the two cities that Lopez idolised. The result? Louis Vuitton’s vision of the universal ‘city-man’.

“I was looking at the impact of and on French fashion of people from the outside, particularly the idea of an American in Paris,” explains Kim Jones. “I was interested in the great impact of Japanese design on Paris in the eighties, of how modern global fashion began to unfold and its impact today. I love Japan, I love Tokyo – it is a place of constant inspiration.” 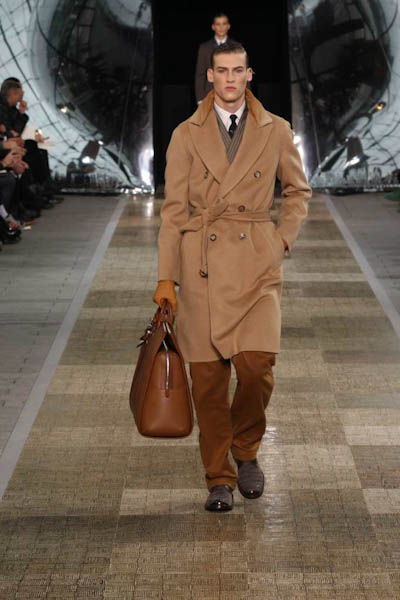 In so keeping with this vision, this season’s designs emphasise a focus on the bold, graphic line and the silhouette. From the undulating line of the seventies, to the plumped up silhouette of the eighties; exquisite tailoring traditions and meticulously researched seasonal sportswear is encapsulated in the collection. With the constant memory of boisterous West converging with elegant Eastern subtlety through fabric, shape, technique, silhouette and style, expect to be confronted with a muted palette of colours, including greys, dark blues, blacks, burgundy, camel and the occasional graphic flash of reflective materials.

The first section of the collection is a re-imagining of Paris from the mid to late seventies. Classic, elegant menswear is modified with subtle  Japanese influence; an idea which will be explored more fully later in the collection. In the second section comes volumous silhouettes reflective of eighties style, inflected by the military influence of technical clothing mixed with tailoring traditions. As the collection veers into dinner suit territory, there is a reinforcement of the notion of East meets West.Traditional Japanese Kimono fabrics are used throughout Western tailoring, and as many of them are hand spun and intensely crafted silks, they are seen as the pinnacle of unadulterated luxury fashion. Here, use of the Jinbei/Kimono shirt becomes more pronounced, and the collection also features a silk suit. Not to be outdone, the Louis Vuitton bag is a key element throughout the entire collection, and roots the overall approach to the design of collection in the Louis Vuitton legacy of global travel.