As part of our take on The Season, we got invited down to Michelin Star chef Marco Pierre White’s glitzy Marco restaurant in the grounds of Chelsea Football Club stadium, to sample the delights of their fabulous Wimbledon Menu, which ran between Tuesday 26th June – Saturday 7th July.

Now whilst a restaurant based in the grounds of a football stadium sounds to have little in common with Wimbledon, having spent some time with General Manager and Sommelier, Livio Italiani, who has managed it since it opened back in October 2007, we were informed that actually the neighbouring Millennium Hotel had become somewhat of a hotspot for tennis stars during the championships. In fact I am sure I even recognised a few faces Frankie’s Sports Bar (also within the Marco Pierre White portfolio), adjacent to Marco, watching the tournament on the big screens outside. 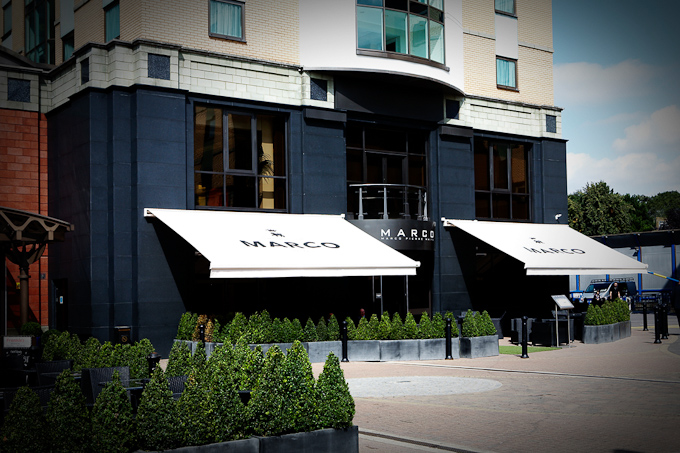 In to the restaurant and setting-off the classy monochrome themed décor (the handy-work of award-winning designer Tara Bernard), the first thing that captivates you is the large gold Swarovski crystal-studded pillar, which acts as a fitting centerpiece, towering above you from the black reception desk that greets you upon entering.
The bar, with golden-yellow topped barstools (matching the pillar), practically runs the length of the back wall, while the intimate dining areas are situated to the left and right of this featuring leather upholstered booths and seductive low hanging mood lighting. Well-presented white-table-clothed circular tables with fresh red roses complete the romantic picture, setting the tone to one of sophistication and opulence. 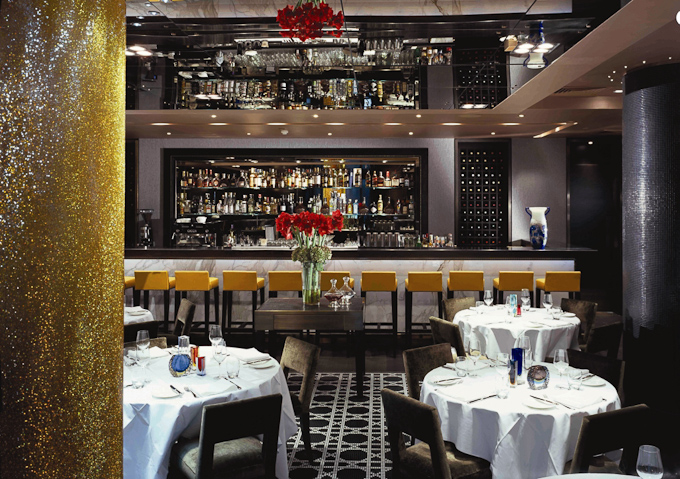 With such centre-court favourites as strawberries & cream and Eaton-mess, the 3-course ‘Wimbledon Set Menu’, appeared to offer a selection of classic dishes, capturing the essence of Wimbledon and would be a fitting dinner for the season. 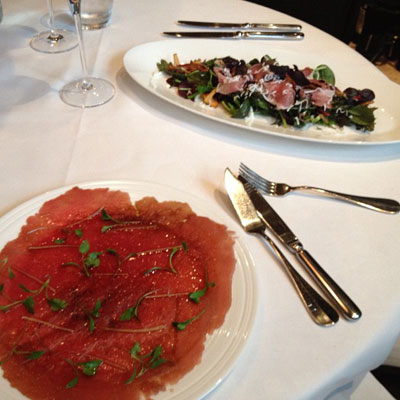 The starter certainly had got us excited, with an incredible ‘Carpaccio of Tuna with Coriander & Fresh Ginger’ plus an equally noteworthy ‘Salad of Prosciutto with Baby Leaves, Fresh Scottish Girolles, Goat’s Cheese Curd & Black Olive Oil.’ I only wish that the main courses had lived up to this, but unfortunately both our dishes, ‘Grilled Halibut with Sauce Tartare & New Potatoes’ plus ‘Goosnargh Corn-fed Chicken Breast, Pomme Fondant & Baby Carrot’ were both a tad over-cooked and neither were presented very well, which given the otherwise impeccable level of attentiveness and quality of service was such a shame. Luckily the simple yet appropriate strawberries & cream put a smile back on our faces to finish things off, and I would still happily return, but think next time I would opt for a more thoroughly practiced main dish next time.

Marco is available for group bookings, parties and events. Dining packages can also be coupled with hospitality tickets for Chelsea FC home fixtures