I will be the first to admit that this is not typically the type of car that you would find gracing the pages of CDCLifestyle, but when it comes to design, you have to hand it to Peugeot that the RCZ truly is a spectacle to behold. For an auto company that has not produced a single good-looking car for almost a decade, this genuinely is worthy of more than a double-take, so when the opportunity arose I simply had to take the Peugeot RCZ out, even if just as a ‘hats-off’ gesture of goodwill to the design team.

Let’s face it, since the hot-hatch glory days of the 80’s, when the Peugeot 205 GTi and Renault 5 GT Turbo were so quick they were biting at the heals of Porsches over three times the price, Peugeot’s only saving grace has been it’s Pininfarina designed 306 GTI-6 and 406 Coupé 3.0 V6. After the latter two examples ceased production around 2003, Peugeot seems to have completely ditched style and performance altogether, in favour of creating what can sadly only been described as tasteless monstrosities.

Aware that their brand was becoming a punch-bag amongst motoring critics, and that sales were diminishing due to their none-inspiring produce, Peugeot knew it had to pull something special out the bag to save face, and if looks are anything to go by then I believe that the RCZ could well be the answer.

Having initially been unveiled at the 2007 Frankfurt motor show, as the ‘308 RCZ’ where it had been conceived as little more than a concept car, it instantly gained such critical acclaim amongst the public and motor industry professionals, that Peugeot bosses thankfully took notice and gave it the green light to be developed into a road going production car. Dropping the ‘308’ name, the ‘RCZ’ was launched in May 2010, courageously sporting practically the same lines and style as showcased on the original concept car. 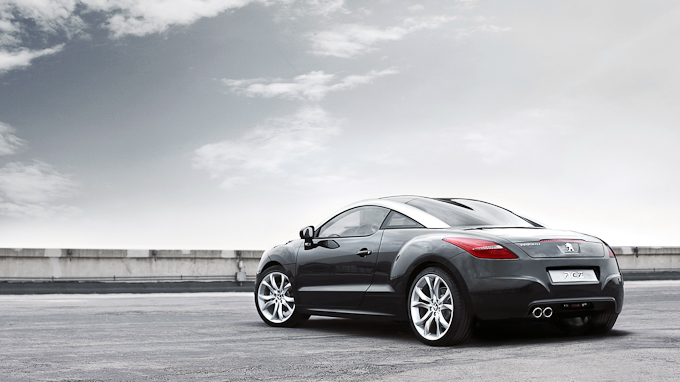 While there are undoubtedly similarities to an Audi TT, the RCZ defiantly stands out as a design masterpiece in its own right, in many respects making the TT look relatively bland in comparison, with it’s futuristic ‘double-bubble’ roof, super-car posture and addictive looks always attracting attention from onlookers wherever it goes. It is also somewhat cheaper than an Audi TT and if you are not put-off by the Peugeot badge, then evidently a more attractive package. In terms of competition it is practically head-to-head with the VW Scirocco with a circa £26,000+ price tag, and short of impractical rear seats (who cares about passengers comfort anyway), there is not really much between them.

Although we are clearly not going to advise you reconsider your purchase of a Ferrari 458 Italia in favour of an RCZ, if that bonus isn’t quite what it used to be and you are still looking for something that stands out from the crowd, there really isn’t anything that comes close to the RCZ in terms of style.

There are three engine options available, all 1598cc, 4cyl, FWD, including a 156bhp petrol version, 163bhp diesel HDI and the flagship petrol-engine ‘GT’ model with a respectable 200bhp – clearly the one I chose to take out. The 0-60mph sprint is a conservatively quick 7.6 seconds (strangely the same as their late 80’s 1.9 205 GTi from over 15 years ago), and maxes out at 146mph. All the usual options available such as air-con, ABS, air-bags, sat-nav, heated/memory seats and so forth. Curb weight comes in at 1421kg and emissions at 159g/km CO2.

What’s more, for all you Londoners who have traded-in your gas-guzzlers and downsized to boring but eco-friendly hybrid alternatives, or perhaps even just make-do without a car, in favour of taxis or public transport;
you can now hire an RCZ for as little as £80 per day or £140 for the entire weekend!

To find out more and experience the joy of the Peugeot RCZ for yourself, contact your local ‘Mu by Peugeot’ garage today! http://www.mu.peugeot.co.uk/