As a quintessentially British brand, fashion powerhouse, Burberry have decided to launch their A/W 12 collection just ahead of the Queen’s Diamond Jubilee celebrations this weekend.

Shot in Greenwich Village at the official Olympic Equestrian competition site, tying in with their ‘Equestrian Knight’ logo, this was Burberry’s most cinematic campaign to date. The set echoed that of a movie with smoke, rain and fog machines employed to emulate the authentic British weather. Christopher Bailey’s latest fashion crusade for the brand is set to be a bigger celebration of Britishness, London and the weather, which some may argue deserves commiseration rather than celebration but that’s what Burberry is all about: embracing Britishness, warts and all. However, with such distinguished creative minds like the DP on the film, Gladiator in the production team and photographer, Mario Testino, shooting the campaign, faults in the British weather could never look anything other than visually breathtaking. 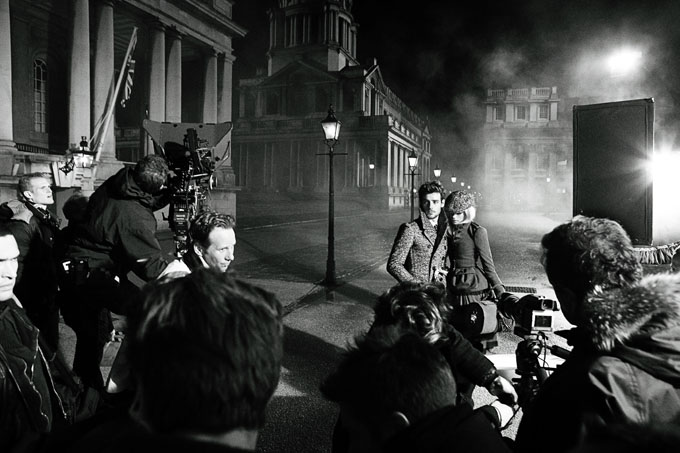 The new campaign also features a new Burberry couple in the rather dazzling forms of actress and model, Gabriella Wilde and musician, Roo Paynes. Taking over the reigns from the stunning Cara Delevigne and the unconventionally beautiful actor, Eddie Redmayne, they have some large shoes to fill but judging from the striking black and white shots, they have managed more than adequately. Recently cast in Stephen King’s Carrie movie alongside Chloe Moretz and Julianne Moore, Gabriella is making waves in the film industry with her latest project, Squatters due for release at the Sundance Film Festival. Roo has recorded for Burberry acoustic in the past, regularly tours the UK and has recorded the soundtrack for the A/W 12 campaign which will be available on itunes from the 1st June when the full campaign will go live across all Burberry platforms and in London stores.

Burberry Chief Creative Officer, Christopher Bailey says of the campaign, “We wanted to play with everything that’s at the heart of the Burberry world – celebrating our brand and London through imagery, film, music, weather and our iconic outerwear, all in a very poetic and British way. Using London as the backdrop, we shot the series of cinematic, emotive black and white images and short films with the incredibly talented Gabriella Wilde and Roo Panes, who effortlessly bring the campaign and our collections to life across all of our platforms.”

The collection itself will be available across all stores globally from the 6th June.