It is certainly true that the best things in life don’t come easy, and it has to be said that finding Barts is just such an example. Had it not been for the suspicious 1940’s looking gangsta scouring the scene outside, then I’m pretty sure we would not have stood a chance. But then again, as we had heard whispers of an entire menu of tobacco infused cocktails, we were pretty keen to get our fix, so nonetheless decided to take our chances, quietly murmuring to the intimidating gangsta if he might point us in the right direction. We were soon briskly ushered through a hotel lobby and down a corridor before being tucked in a side door. In true ‘speakeasy’ fashion, there was a few loud knocks on the next door before a hatch opened and we were beadily checked out by the bar-tender before the door was then promptly un-bolted and we were hastily bundled-in, whilst our guide shuttled back to his post.

All the drinks on the Barts ‘Goes up in Smoke’ menu utilised Perique Tobacco Liqueur, which is made by artisans from the rarest tobacco in the world: Louisiana Perique. The liqueur contains all the rich aroma of this tobacco, but in a form that greatly diminishes the health concerns associated with its traditional use. The drinks served at Barts all had quirky smoke-themed names but two of our favourites (pictured right) included; 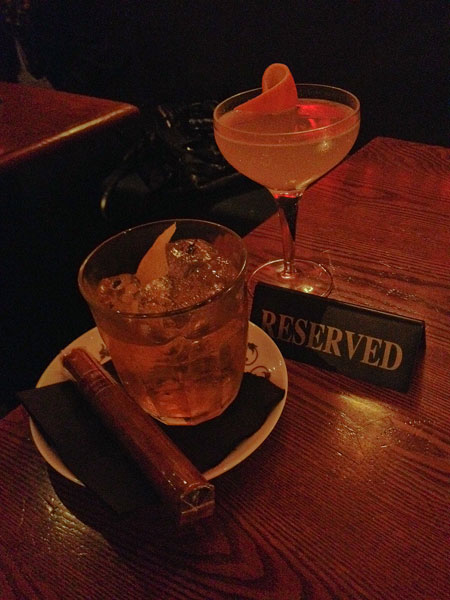 Barts is a quirky ‘speak easy’ style bar on prestigious Sloane Avenue in the heart of Chelsea. It is the brainchild of Duncan Stirling and Charlie Gilkes, the dynamic duo who also own the highly successful 80’s themed nightclub, Maggie’s. They launched Bunga Bunga, an Englishman’s Italian, Bar, Pizzeria and Karaoke in Battersea this autumn to widespread acclaim.

“The Barts Goes Up In Smoke Menu is one habit you won’t want to break.”