Rolls-Royce celebrated the success of the Games at the Closing Ceremony on Sunday evening, when three Rolls-Royce motor cars sporting newly-designed badges for the first time in the company’s 108 year history were paraded through the Olympic Stadium. Designed by the Rolls-Royce Bespoke Design Team, the new badges have replaced the traditional double R-R for the first time since the British company was launched in 1904. 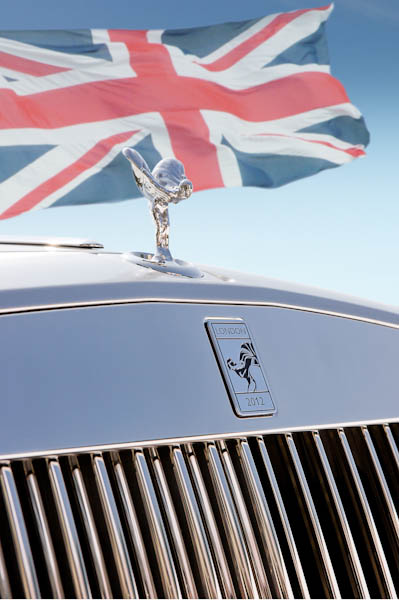 The three spectacular Phantom Series II Drophead Coupés were appropriately finished in glorious British White, and although the new grille badges still featured the iconic Spirit of Ecstasy, a patriotic Union Flag replaced her traditional flowing gown. The steering wheel center included a traditional laurel wreath and torch, and featuring the words ‘London 2012’ and surrounded by the Olympic motto, ‘Citius, Altius,Fortius’ (‘Faster, Higher, Stronger’). Perhaps the most collectable (and unobtainable) Rolls-Royce Bespoke items ever produced, the new badges are accompanied by unique tread plates which identify each car as being ‘One in Three’.

The Bespoke cars were featured in the Closing Ceremony in an act entitled, ‘A Symphony of British Music’, in which they carried British musicians Jessie J, Tinie Tempah and Taio Cruz. The artists were hidden from view as the cars crossed the auditorium with majestic grace, before being revealed as each convertible roof gracefully descended. The cars were driven by specially trained Roll-Royce employees.

Of the event, Torsten Müller-Ötvös, Chief Executive, said, “I am delighted that Rolls-Royce Motor Cars was invited to take part in celebrating the success of the Games, and it is appropriate that we should recognise this occasion with a fitting tribute. These unique cars were hand built at the Home of Rolls-Royce at Goodwood by our dedicated and passionate workforce, and the whole team can take great pride in their part in making history for our company”.