Among several Titanic-related items are two extremely rare R.M.S Carpathia Medals – one in bronze and one in silver – awarded for the rescue of the survivors of the Titanic are estimated to fetch £4,000-6,000 and £3,000-5,000 respectively when offered for auction in London next month. Inscribed ‘Presented to the Captain, Officers & Crew of R.M.S Carpathia, in recognition of gallant & heroic services from the survivors of the S.S Titanic, April 15th, 1912’. The bronze one is engraved ‘J.J.K Q.M’ – making it even more rare. J.J.K refers to J.J Kirkpatrick – who was known to his crew members as Benjamin and was born in Liverpool. The sale takes place 10 days after the 100th Anniversary of the Titanic disaster. 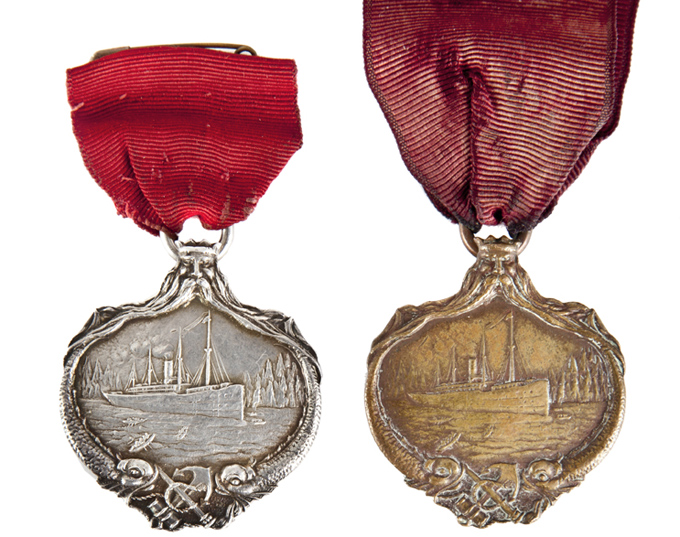 Elsewhere, objects relating to Nelson is a letter from Captain Horatio Nelson requesting supplies for H.M.S Agamemnon to Commodore Robert Linzee, which is estimated to fetch £1,500-2,000. This was signed by him before he lost his arm.

• Emotive Titanic medals
• An emergency helm and two Portholes recovered from a White Star Line wreck, (a contemporary of Titanic)
• A Titanic crewman’s discharge book
• A Collection of plans for Titanic’s construction dock by Harland and Wolff, dated 1907/8
• A request signed by Nelson, before he lost his right arm
• Eye witness account from the Battle of Trafalgar
• A Pioneer’s photograph albums of the earliest submarines in the Royal Navy
• Pre-Britannia racing yacht model … fit for the Prince of Wales
• Shackelton’s Captain’s antarctic slides and magic lantern
• Relics from the foundation of the modern information super highway dating from the mid-19th century.
• Was this Joseph Banks’s compass from Captain Cook’s first voyage?
• Work from the grand master from the golden age of scrimshaw
• A portable time device from Henry VIII’s era
• Photographs from one of the earliest travel exploration photographers

Charles Miller Ltd’s auction and sale is open to all and is a unique opportunity to see and buy some of the rare, curious and historic items that will be coming under the hammer next month in London.