Erarta Galleries London is pleased to present Les Paradis Naturels, a new collection of paintings by Aleksey Chizhov. One of Russia’s finest emerging artists, Chizhov’s paintings present a hallucinatory world encouraging growth and emotional development. In “Paradis artificiels” (Artificial Paradises) Charles Baudelaire writes about opium as the wrong way through which humankind can achieve enlightenment; a taste for the infinite satisfied by the creation of a pharmaceutical heaven. Chizhov, however, uses the symbol of poppies as a metaphorical escamotage to encapsulate the struggle evident in our society – whether to run away and hide from one’s problems, or to face them. “Les paradis naturels” (Natural Paradises) was chosen as the title for Alexey Chizhov’s exhibition, as his work is a true manifesto inviting us to pursue an emotional and cognitive journey of self-growth. 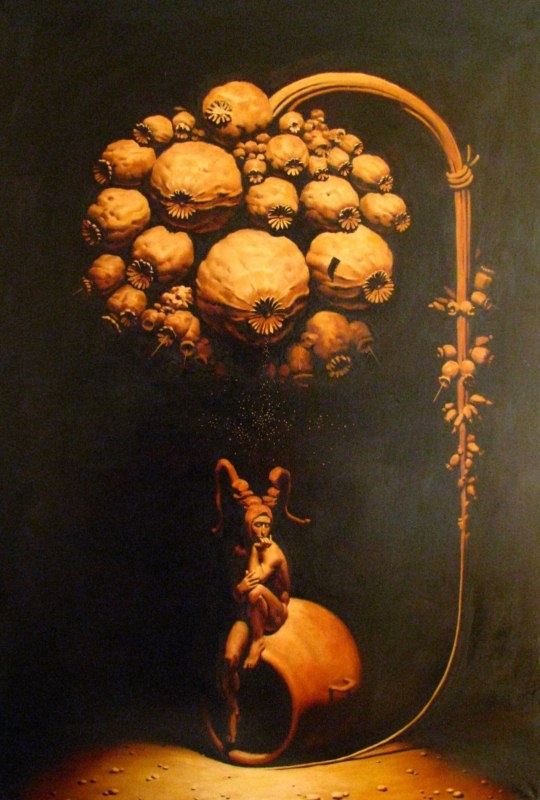 Aleksey Chizhov uses the image of the poppy to evoke an intermediate gap in the transition from one dimension to another; like the natural shifting between temporal patterns or the initial phase of entering into a state of dream-like consciousness. There is a great deal of symbolism surrounding the poppy, starting with Greek mythology, all of which Chizhov quotes in his work. For example, in Morpheus, the Greek god of dreams is seen sleeping under a poppy flower, suggesting an isomorphism between the state of unconsciousness and the hallucinatory power of the opium extracted from the flower. According to Jacques Lacan the state of sleep is a disjointed place, existing between the subject and the conscious world, a rupture that takes the shape of a dream-like escape into a world of fantasy and illusion. This can perhaps be most clearly seen in Orpheus and Euridix where the subjects are merged with the poppies into a state of surreal suspension, a sort of stillness recovered from the multifold forms of the becoming. Chizhov’s symbolic opium in these terms emancipates us from the embrace of the instantaneous present and allows Euridix and Orpheus to experience the slow, suspended, healing flow of time.