While what it is that had us all glued to the TV screen, methodically watching each and every episode is still not yet quite clear, the fact is that we all watched the first series and although not openly enquiring, the question on all our sealed lips has been “When is the second series?” ….”Well here it is… our guilty pleasure is back!!!”

21-year-old Edinburgh University student Louise has lived in London all her life. When in town she resides in South Kensington and is a regular on the West End club scene. Louise went to boarding school with Rosie and they are great friends; “best friends in fact”. She dated Spencer for six months and they rekindled their romance this summer. She has also dated Francis.

24-year-old party-lover and artist Ollie is currently putting all his efforts into working on his fashion brand Serge Denimes. Ex-girlfriend Caggie is a big fan of the brand and has been helping out by modelling them for him. Ollie’s father owned Foxtrot Oscar off of the Kings Road and his mother is a successful photographer. Ollie attended Eton College where he forged a long running friendship with Spencer. He has also known Hugo since he was about 15, when he met him on the social circuit, and they have stayed good friends ever since. Ollie went to university with Caggie’s older brother Freddie. Ollie considers himself very chilled out but at the same time “everyone likes a bit of attention”.

Chloe is 20 years old and lives in London – very close to the Made in Chelsea favourite haunts of the King’s Road. Chloe is bilingual, having been to school and lived in Monte Carlo, and her favourite pastimes are following fashion, sketching and designing and being a wise shoulder for her friends to lean on. Chloe is very happily dating Ollie Locke, and is going to find herself the best blow-dryer in town on speed-dial for the second series. Chloe says: “I wanted to do something that I initiated myself, and as I am already friendly with lots of the cast from series one, it seemed like a good idea for me to be part of the second series of Made in Chelsea. I am excited to give this a try, and hopefully I will have some fun and learn lots from the experience.”

22-year-old Jamie is heir to the McVitie’s fortune and his ancestors are credited with creating the jaffa cake, digestive and rich tea biscuit. Carrying on the tradition, Jamie’s biggest plan in life is to open a ‘sexy sweet shop’ where customers will be served by ‘Candy Kittens’. A bad night out for Jamie is “one where I don’t pull.” In the past he’s had a thing with Caggie and Millie but thinks relationships are overrated because he’s too young to settle down. He is, however, 100% committed to the business of having fun and loves to party in Berlin, St Tropez and New York or at Public and The Box when he’s in London. His three special powers are that he doesn’t sweat, never tires and can sleep anywhere. He is most scared of his bank manager. Jamie says: “I hate to miss out and I can’t say no. This can lead to trouble.”

Swimwear entrepreneur Victoria loves fashion and her pet pooch ‘Foxy’, and describes a music festival as her idea of hell. The 23-year-old is half British, half Fijian, grew up in Chelsea and has a second home in the Bahamas… but she loves exploring New York and the South of France. She confesses to owning more than 30 pairs of Christian Louboutin Heels (“not as many as Chloe”), always has her nails painted and refuses to ever cut her hair. Describing her perfect man, Victoria says unkempt nails and bad shoes are her ultimate turn offs and she likes a man who treats her like a lady. Revealing what people can expect of her on Made In Chelsea, Victoria says: “If I don’t like someone, I can’t be nice to them. I trust my instincts and they’re always right”.

But most of important, is the news that Series 2 is due to return to our TV screens next month, check www.e4.com/chelsea for all the latest news, behind the scenes footage and extras. 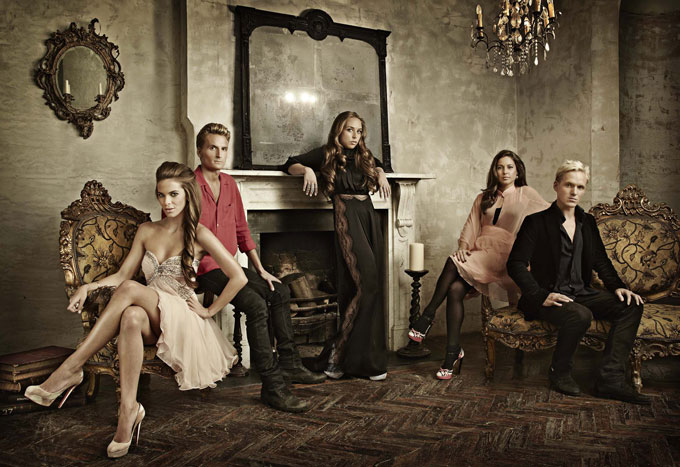