Actually just stumbled across this curiously relaxed gem of a track via a friend’s Facebook page and have subsequently listened to it at least 4 times on the trot and can honestly say it’s definitely a grower. 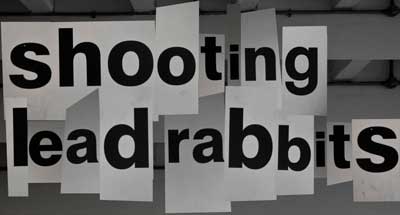 Having delved a little deeper I found that the Shooting Lead Rabbits is essentially a musical outlet for artist and singer/songwriter Christopher Jenkins, who performs and records with a relatively loose consortium of collaborators. His self-titled debut album was written and produced (also predominantly performed) by Jenkins himself, before becoming signed to Thirdlight Records in 2010.

Shooting Lead Rabbits’ sound is essentially a quirky blend of surprisingly upbeat Retro Folk Rock although their debut album is truly so diverse that you simply have to hear it to make any sense of it. Vocally, Jenkins is a beautifully gracious songwriter with his smooth catchy lyrics under-pinned with an organic earthiness, which somehow (quite precariously) contain the poignance and realness of his words.

All-in-all, a rather weird and wonderful musical combination set somewhere between The Kinks and Gomez, which is without doubt a fine place to be sitting. Definitely one to watch out for!

Check out their website for all their latest news and gig dates: