With the benefit of hindsight, we can now say that the Monaco V4 Concept of 2004 marked a turning point for TAG Heuer. Yes, TAG Heuer had shown some innovative Concept watches before (The Micrograph of 2002 and the Monaco 69 in 2003), but the audacious V4 was the first sign that the “new” TAG Heuer was serious about re-establishing its credentials as a manufacturer and designer of advanced mechanical movements.

Since 2004 TAG Heuer has shown a brace of innovative movements- the Calibre 360, the Pendulum, the Mikrograph and Mikrotimer- but it all started with the V4. So advanced was the V4 that most people though that it would never make it into production for two reasons. Firstly because it was believed that the belt system wouldn’t provide the necessary reliability and secondly because this incredibly innovative system was being put forward by TAG Heuer rather than an established manufacture. 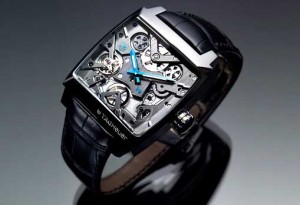 What did TAG Heuer know about designing and making a movement, let alone one as complex as the V4?

The story of the Monaco V4 started out with an R&D think-tank established within TAG Heuer in late 2001. The company was only a few months into its life as part of LVMH and had just appointed a new CEO- Jean-Christophe Babin. As Jean- Christophe told Calibre 11, one of the first things he noticed about TAG Heuer was that the company had lost its reputation as a watchmaker- and he and the new team was determined to re-establish these credentials. The goal was far more ambitious than just designing and building an in-house movement: The goal was to re-invent some of the basic principles of watchmaking………