Watch maker Louis Moinet unveils the Meteoris, a set of four watches and a rather fascinating mechanical planetarium, available to you for the princely sum of $4.9m. Although undoubtedly an object of (at least curious) desire, it appears the target market are astrological and horological connoisseurs with discerning taste and evidently deep pockets. 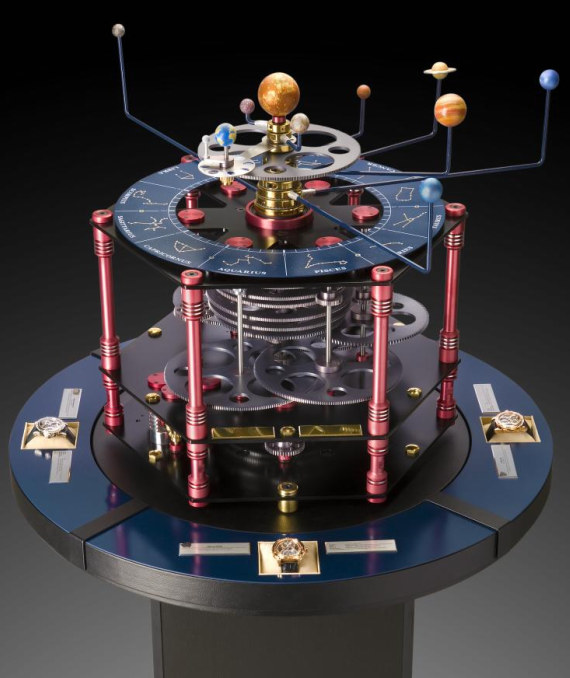 Weighing it at about 100 kilos with a 91cm diameter and standing 150cm tall, the plantarium table and mechanics where crafted by mechanic Rémy Chauvin. The masterpiece features the Sun in the center with each of the planets (made by artist Jean-Yves Kervévan) moving around it in real time. Each of the paints and varnishes used are hand made, with dust from meteorites being used on some of the orbs. There is a scale for the zodiac that depicts which period we are in and each of the constellations of the zodiac are covered in gold dust plus top Wesselton VVS diamonds (154 of them totaling 5.6 carats). Whilst the planetarium’s mechanics remain a bit of a mystery, it is a clearly somewhat of a spectacle to be beheld and for further showiness the Meteoris also has a foot switch that can be activated to show you the rotation of the plants sped up, as evidently watching them move in real time would be a very slow process indeed.

Starting with the top down, the first watch is the Louis Moinet Meteoris Tourbillon Mars watch. Each of the Meteoris watches are 47mm wide with complex cases that are made of about 50 parts. The watches have sapphire crystal and one-minute tourbillon manually wound movements. The movements also have a partially skeletonized main spring barrel that shows the tautness of the main spring as a form of power reserve indicator (total of about 72 hours). The Mars watch further has 3.46 carats of 56 baguette cut diamonds on the case bezel and lugs. The dial around the openings is made from a meteorite called “Jiddat al Haraiss 479” that was found in Oman and authenticated as originating from Mars by the Russian Academy of Sciences in Moscow.

Next on the solar system list here is the Louis Moinet Meteoris Rosetta Stone watch. What does this mean? Well the rose gold watch has a dial that is made from the oldest meteorite found on Earth. It is the Sahara 99555 stone, and nicknamed the “Rosetta Stone” (no relation to the language tablets also known as the Rosetta Stone) and is said to be 4.5662 billion years old. According to the Institute for Planetology of Munster, Germany, this stone is thought to have originated from the planet Mercury.

Third is the Louis Moinet Meteoris Tourbillon Asteroid watch. You guess it, 18k white gold case, more diamonds and the dial here is from a meteorite that came off of an asteroid. The stone was found in the western Sahara desert in Africa. You’ll notice that each of the watches has a small, but unique engraving mirrored and on the top of the watch at the apex of the mainspring barrel. Here the image shows a little meteorite said to be falling to Earth. The stone is quite lovely as the dial and is cut from Itqiy (the name of the meteorite). It was said to be formed near the Sun, and was authenticated by (my alma mater) the University of Arizona in Tucson.

Fourth and final for the Meteoris watches is the Louis Moinet Meteoris Tourbillon Moon watch. Again you have the lovely and large Jules Verne style watch case as taken from the style of original Louis Moinet drawings attached to the alligator strap with a dial that is bona bide moon rock. Once again from Oman, the stone is from a meteorite called Dhofar 459, and has been authenticated by UCLA. Once again, each of the dials used for these watches was cut from stones found terrestrially on Earth and are considered very rare. For serious (and seriously wealthy) watch lovers, the Louis Moinet Meteoris is the ultimate collection and there will only be one set.