Whilst it is undoubtedly a definite improvement on the WRX STi hatchback, that frankly made most of us wretch when its repulsive backend was indecently exposed to the motor industry at New York Auto Show back in April 2007; aesthetically the Subaru WRX STi 340R saloon is unfortunately still unlikely to attract much attention beyond the prying eyes of suspecting police officers and teenage boys.

Although I snobbishly felt a tad embarrassed about being spotted in it anywhere near my West London home, I was secretly quite a sucker for the ‘San Remo Red’ paint-job which looked undeniably menacing with the factory fitted black alloy wheels. Inside, the Recaro bucket seats looked and felt the part, but sadly, however sporty the monochrome and red colour scheme appeared, it could not disguise the nasty cheap plastic dash and trim that infests the interior. To make things worse, I could not help but chuckle at the large ‘STI’ badge on the steering wheel that appears to highlight the misfortune of many of Subaru’s (dare I say) chav audience.

Rant over; as soon as I dip the clutch, press the inviting start button and tease the accelerator pedal, I immediately forget everything I just slandered it for.

“As the unmistakable sound of the highly tuned four-cylinder boxer engine roars to life with its addictive exhaust note that resonates with the prowess of over a decade of rally success, I find myself with a childish grin firmly planted across my face in recollection of exactly what the WRX STi is all about.”

Even whilst idling, the perky tone of the engine burbles mischievously in anticipation of the next stretch of road that it hopes to devour. 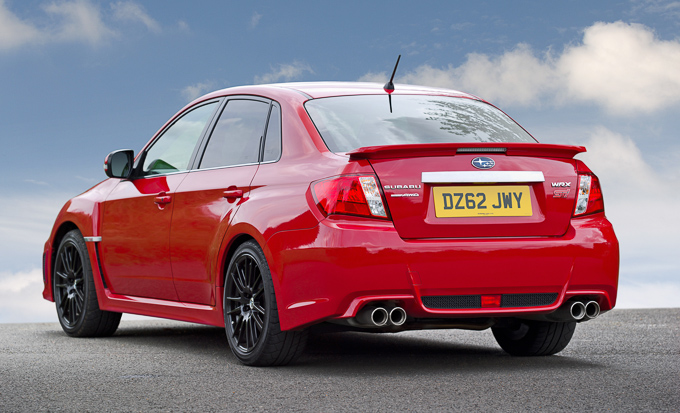 The drive feels reassuringly stiff and rigid, with a chassis (unlike the flimsy interior and loose gear-knob), that feels capable of withstanding the type of abuse that would see me soil myself before it gave up the fight. The WRX STi certainly won’t win any beauty pageants, but this is not the type of car you drive to impress others,

“this is a self-indulgent car for the kind of thrill-seekers who should not be allowed on public roads and perhaps better suited to playing Gran Turismo on their Playstation.“

This is also not a criticism, as I do not know a single guy alive who would not enjoy pushing this car to the limit, but worth noting that I had to wake up at 6am on an overcast Sunday morning to be able to put it through its paces on public roads and even then felt guilty for my sins. Even typically responsible drivers will inadvertently become psychotic adrenaline-fueled lunatics behind the wheel of the WRX. Over-taking feels like dodging stationary vehicles in the road and the All-Wheel Drive system is so effective that I had to attack dual-carriageway roundabouts at hair-raising speeds to get any sideways action.

Beyond their three-year / 60,000-mile manufacturer warranty, all Subaru’s conveniently include their Everything Taken Care of (ETCo) aftercare package which covers minor dent and scratch repairs, alloy wheel repairs, monthly wash, annual valet, lost keys replacement, service collection and delivery amongst numerous other benefits, but it is the accident management service and a contribution to insurance cover excess element of the policy that I can’t help think gets the most abuse on this policy.

All-in-all, I would have to say that whether you are a young boy-racer, or a distinguished diplomat, you would be hard pushed to find a car more fun to drive and advise you to arrange a test drive today at www.subaru.co.uk/