When we first clocked the GEMBALLA GT at the Geneva motor show we were instantly taken aback by it and have to admit that visually it was defiantly the most stunning car on display. What makes it all the more appealing was that while there is no doubting the fact that McLaren’s extensive motorsport expertise, and high-tech perfectionist approach has resulted in a car with incredible abilities, it just never looked quite right. There is no doubt it is beautiful, but it just always seemed to lack the pizazz of a Ferrari or the menace of a Lamborghini. Luckily however, The renowned German Porsche tuning company GEMBALLA also noticed the same thing and brushed aside the Porsches to turn their attention to finishing off the McLaren the way it should have left the factory. 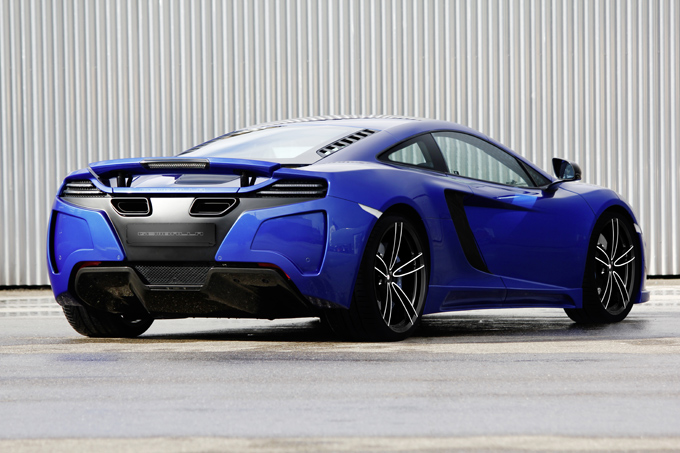 “Pure performance with real passion” is the philosophy for the first non-Porsche-based car to wear the GEMBALLA GT moniker. Using the all-new McLaren MP4-12C as its base, the debut of this car opens a new chapter in the GEMBALLA story.

“Our challenge was to imbue the missing emotion into the GEMBALLA GT version of the MP4-12C,” explains GEMBALLA CEO, Andreas Schwarz. “Our starting point is a aerodynamic styling kit and ultra-light forged alloy wheels, and we are developing an engine upgrade programme as well.”

Both McLaren and GEMBALLA have an obsession with lightweight, high-strength construction that has led them to the extensive use of carbon-fibre. From its F1-inspired carbon-fibre centre tub to the body panels, the McLaren MP4-12C embraces this philosophy and tips the scales at just 1,434kg, propelled by a lusty 608hp/441 kW bi-turbo 3.8 litre V8 motor.

The GEMBALLA GT aerodynamic kit consists of a new front bumper/spoiler, side skirts, rear apron and a small rear wing, all made in Germany. These components give the car a more purposeful air and further improve its high-speed stability. They are fitted to the factory mounting points so the original bodywork is not compromised.

Bespoke GEMBALLA forged alloy wheels are a size larger than factory with 20 -inch diameter wheels at the front and 21-inch at the rear. These wheels fill the arches and give the car a more muscular stance, while further increasing mechanical grip.

The GEMBALLA GT programme for the McLaren MP4-12C adds significant gravitas to the cars appearance, and the forthcoming technical modifications promise to add more emotion to the driving experience as well.