Top Gear Live is shifting up a gear into the larger London Excel Exhibition Centre in Docklands for 2011, where an all-new format will include a specially built Top Gear indoor track configured by Lotus Motorsport The previous format of MPH featuring TopGearLive in Earl’s Court has been superseded by a bigger, bolder event that will debut at Birmingham’s NEC from 11-13 November, closely followed by its new capital home at ExCeL London from 24-27 November. Billed as ‘The ultimate Top Gear experience’, visitors can expect all the on-screen, supercharged excitement of the TV show rolled into one live event.

It will be hosted by the now infamous UK Top Gear trio of Jeremy Clarkson, Richard Hammond & James May in a re-creation of the Top Gear studio, while featuring many of the highlights of the TV show. This will cover everything from Stig power laps, Star in a reasonably priced car, as well as the Top Gear Stunt Team, head-to-heads and supercar parades.

“The idea is simple; to create the ultimate motoring event in the spirit of Top Gear” Commercial Director of TopGearLive, James Cooke-Priest Also on the agenda is a bit of an Olympic theme; as Britain prepares itself for the 2012 Olympics, the Top Gear Live team has come up with some rubber burning, metal crunching alternatives to truly give Lord Coe the jitters this November. After all, in it’s new ExCeL home, Top Gear Live is practically just a stone’s throw from the Olympic site, so what better way to celebrate than suggesting a few alternative sports for the International Olympic Committee (IOC). (images above from 2010 Top Gear MPH at Earls Court Exhibition)

“Since none of us managed to get tickets in the Olympic ballot we thought we’ll do our own running, skipping and throwing event but with cars…and flames…explosions…and motorised chariots and things,” commented Jeremy Clarkson. 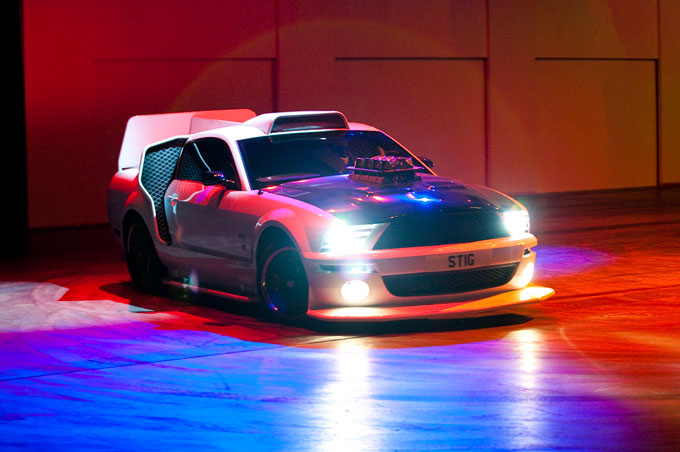 In a cross between Chariots of Fire and Ben Hur, Clarkson, May and Hammond will compete in the first ever Moped Charioteering Race. Designed by the boys and powered by a bank of four 125cc mopeds, each chariot features easy to misunderstand controls and is capable of ‘dangerous’ speeds.

If that’s deemed folly by the IOC, how about Car Curling? Yes, full-size cars on castors, a target and a powerful motorised sweeper operated by Captain Slow.

Next up will be the Top Gear Live version of that most traditional of English village fair games, Splat the Rat. Here, remote controlled cars will replace the stuffed toy rat target with the boys attempting to crush them in their mechanical weapons of choice. Failure to come first or second will not result in a bronze medal though….the producers have something rather special planned.

And it’s double-bubble this year as not only will visitors enjoy the traditional mad-cap Arena Show with Clarkson, Hammond and May, they’ll additionally be entertained by an 80 minute Track spectacular on the specially devised Top Gear Live track. The Lotus Motorsport configured tracks will feature a non-stop schedule of noise and action including the new McLaren MP4-12C, Lamborghini Aventador, Ferrari 599 GTO, McLaren F1 and Aston Martin V12 Vantage.

But Top Gear wouldn’t be the same without The Stig showing off his unique skills on power-laps around the indoor tracks at Birmingham’s NEC and ExCeL London this November (11-13 and 24-27 respectively). Other highlights on the track will include demonstrations from friends of the show Sabine Schmitz, Tiff Needell, Derek Bell plus a unique rendition of Stars in a Reasonably Priced Car with special guests including Radio & TV presenter, Chris Evans.

To keep up-to-date and for the chance to win exclusive behind the scenes experiences,
keep an eye on facebook.com/TopGearLiveUK, Twitter @TopGearLiveUK & www.topgearlive.co.uk

Tickets start at just £49 and for more information about the show or to book tickets visit www.topgearlive.co.uk or call 0871 230 5588.