Blind dining is a very rare and particularly unique experience, which is available to try out from the 29th September to the 2nd of November at Lancaster London in their restaurant; The Island Grill.

First let me tell you a bit about the Lancaster without the blindfolds; the lighting was low and warming, with candles dotted among the tables. The décor is opulent but not at all stuffy and the bar hosts an array of exciting floral displays.

We began our evening with a camparini allowing our visual senses to map out the interior and also the views into Hyde Park. Then darkness came as we were supplied with blindfolds that would produce an entirely different dining experience. 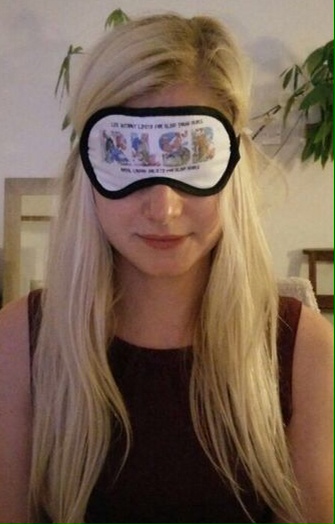 I must admit I was reluctant at first, mainly because the other diners weren’t blindfolded, but once the blindfold was on it actually became rather liberating. We talked and listened intently to one another, never butting in, which I must admit was a new experience for us both. Not being able to see one another’s reactions made the conversation much deeper and the way we explained things seemed more sensual.

Our waiter explained the courses to us in detail and helped us feel where everything was located on the table. She was trained to help blind people dine, which meant we were more than capable in her hands.

The event is being held to challenge perceptions about visual impairment and to raise awareness for the Royal London Society for Blind People as part of its ‘London without Limits’ season of blind-folded events.

The blindfolds will be available free-of-charge in Island Grill throughout the promotion – and these aren’t just any old blindfolds.  Designed by the likes of Wayne Hemingway, Giles Deacon and Julian Macdonald, Island Grill’s diners are guaranteed to look super-stylish.

I’m pleased to say that as far as I know, I didn’t spill anything, much to my surprise. My fellow diner, of course, had quite the array of delights on his mat. You are allowed to use your hands to guide the food onto your fork, or you are free to just use your hands and do away with cutlery.

I couldn’t risk having soup to start so I had warm asparagus spears and mozzarella, with red pepper salsa and garlic crumbs (which I eventually managed to navigate to my mouth, bypassing my nose) and for my main I had sirloin steak with creamy garlic mashed potato. Now I know this was good steak and mash, but I have a feeling that by being blindfolded your taste really is heightened. I think I may have been making a few too many appreciative noises, but who cares.

By detaching myself visually from my surroundings, I found great pleasure in both the delicious food and the detailed conversation.

The Sanderson’s staff will guide you through the experience with their extensive knowledge and will also laugh along with you when you’re clearly not being a pro. After a chat with our waitress you could really see how passionate she was about what they were doing for the Royal London Society for Blind People.

The Island Grill is located on the Ground Floor of Lancaster London and is just next door to the Lancaster Gate tube station on the Bayswater Road.