Newcomer on the design scene, Bryan Oknyansky has bridged the gap between fashion and architecture with his otherworldly luxury high-heels.

Fashion and architecture seem like an unusual blend of interests but Bryan Oknyansky has proved that unusual can make for extraordinary too. The award-winning architecture and women’s footwear designer is rapidly making a name for himself in the fashion industry with his outside of the box visionary approach. Boasting catwalk shows at Berlin Fashion Week SS12, Paris Fashion Week SS12, and Manchester Loves Fashion SS12, as well as having held private viewings in exclusive West London venues, his presence looks to be unstoppable.

Bryan’s latest collection ‘Heavy Metal Series’ for Shoes by Bryan takes applied physics to new, fashionable heights. The collection was born from a collaboration initiated by Berlin-based Haute Couture label Kimberit in the span of his first six months as an official luxury footwear designer. The brief both poetically imagined and materially defined an exploration of how twilight flattens our perception of 3D space into 2.5D space. From this concept, Bryan Oknyansky went on to design footwear that dramatically re-defined the silhouette and re-engineered the structure of high-heels. The collection fused steel, technology, and above all beauty. 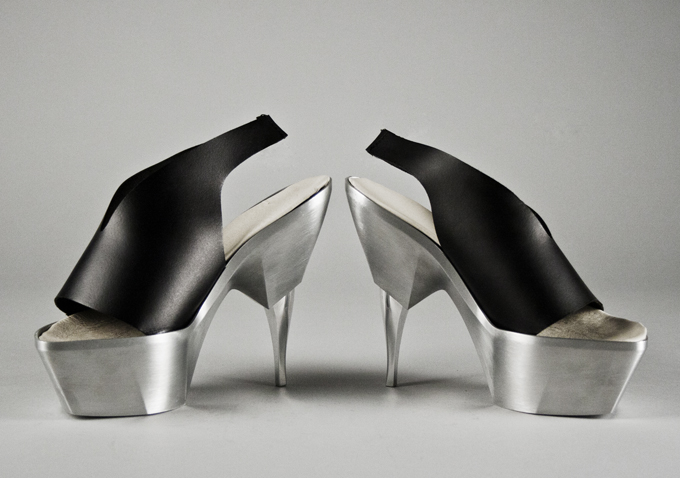 The process of making the steel wonders was intricate, systematic and certainly innovative. The designs were all produced 100% digitally whilst the initial prototypes were created using 3D printing technology. The shoes were then shaped and sculpted into their impressively distinctive forms by a robotic drill given translated instructions to carve away. As the technology is mostly used by the aerospace industry, these experimental designs are bespoke for the art-collecting-shoe-loving connoisseur. 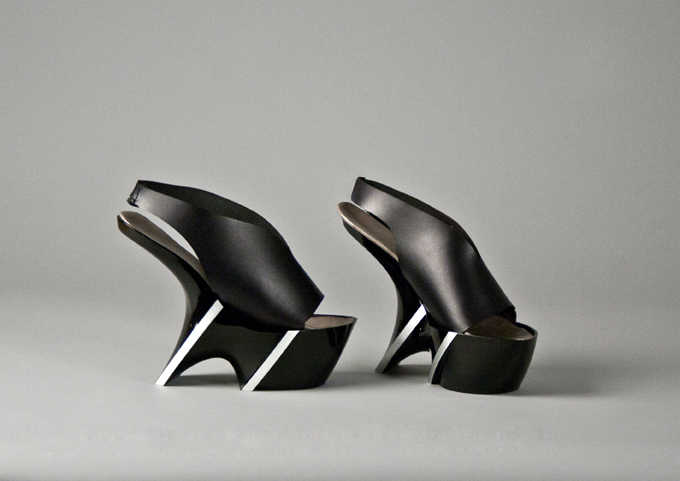 Bryan Oknyansky approached the meticulous method with experience in advanced digital manufacturing technologies, enabling him to make his first soirée into luxury high-heels from concept design to finished sample in just a matter of weeks. He is now creating new collaborations with other international Haute Couture designers. Bryan is currently gaining international recognition for his visionary footwear collections and is poised to disrupt the global footwear market with his revolutionary footwear. Watch this space!