Travelling with the Royals – artist ALISTAIR ERSKINE in Spain, Portugal and Morocco with the Prince of Wales and Duchess of Cornwall

Alistair Erskine works at top speed to make his oil sketches en plein air. He paints directly from nature, with a simplicity and freshness that must have attracted Prince Charles to invite him as ‘official tour artist’ to record one of his journeys.

Alistair describes the most action packed ten days of his life moving from plane to motorcade across three countries, equipped with his travelling easel and prepared board and a windcheater for rapid costume change. There was a retinue of some twenty people, and virtually no glitch except once in Spain when his box of paints aroused, mercifully brief, security suspicion.

18th century grandees used to travel with artists to record their favourite views – so the prince is following a noble tradition. One English artist traipsed around Italy with the 2nd Earl of Warwick acting as a human camera. Richard Wilson dutifully painted views of Rome for the Earl of Dartmouth, though not part of his immediate entourage. 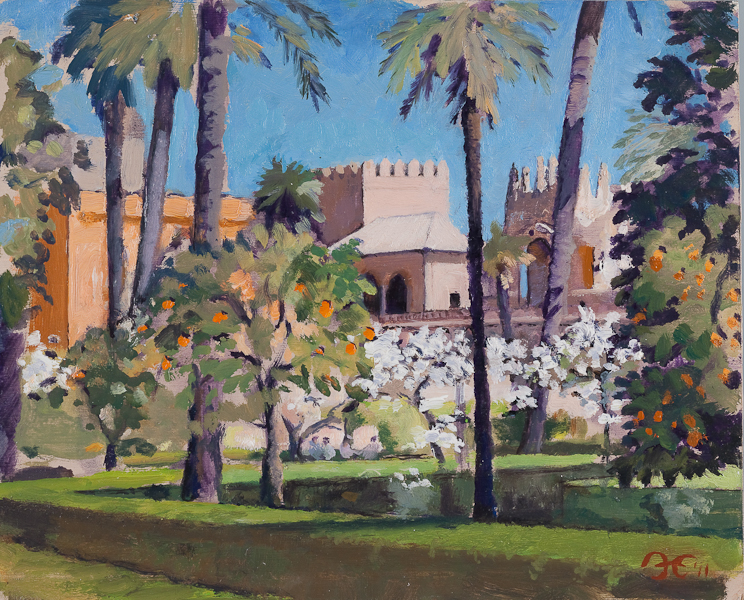 Alistair Erskine has spent his working life as a decorative artist devising paint treatments and murals for stately homes and opulent apartments. He has lost count of his billionaire clients. Such careful and painstaking brushwork has given him an intimate knowledge of each tube of paint and its special character. So he can mix in an instant. He has been painting landscapes for twenty years, on family holidays in France, Scotland and the West Country, trying to capture visual beauty without artifice.